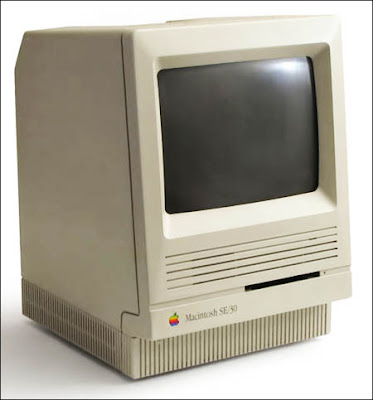 Somehow it's hard to believe we've come so far from this cute little box of a computer to a World Wide Web of place we live in today, yet only 25 years ago the first Macintosh computer was revealed in an ad during the Super Bowl game. A few years after this Mac SE/30 appeared we saw the first portable computers, suitcase sized then and tiny 'netbooks' now. Memory was tiny, way less than a 'meg' and now our phones have far more computing power.

I've been a fan since the late 1980's when I bought my first Mac "for the kid's education" was the family selling point... Since then I've had several more including a couple of laptops and as many desktop machines. They've all been great machines, although one got stolen right out of my classroom one morning when I stepped out for a minute, leaving it unattended. I wasn't the only one to fall in love with the Mac!

So I'm happy to celebrate the Mac's birthday today. I can't wait to see what the next 25 years will bring to the computing world! Oh, and if you're celebrating your birthday as well today, know that you're in good company. Get on the web and say hello to your friends!
Posted by Michael at 9:37 AM