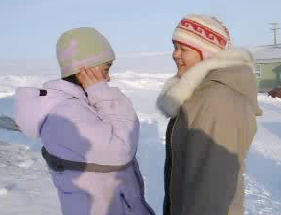 Lots of ice-bound northern kayakers are bemoaning the lack of liquid to paddle on these days. Let's not forget that the Inuit originally developed our qajait for summer use! In the wintertime when all was frozen it was time to turn to other interests.

For example, if you're a woman, there was throat singing as shown in this video on the Canadian Geographic site recently. Recently more men have been giving the technique a try and why not. It's a great way to get your breathing under fine control and perhaps even help with the 'gasp reflex' when rolling in cold water...

Visit the site to see the video and a bunch of other Nunavut related stuff on the 10th anniversary of the territory!
Posted by Michael at 4:56 PM