Sometimes They Just Don't Get It 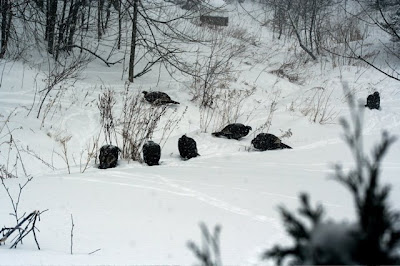 Curiously enough, about the same time that wild turkeys began showing up in our area, another similar breed also made its presence felt. Just as the turkeys don't seem to care if they scare our horses and panic them into charging through their fences, this other breed has little care for boundaries or the environment. The turkeys came on their own, completely uninvited. The other group Canadians collectively voted for - or at least a small percentage of those who bothered to vote did. What were they thinking, if anything?

The turkeys, I can deal with. The horses will soon learn to accept them and will settle down. The others? Well, they frankly scare me. You see, they don't get it. The world's economy and the planet's environment is under serious attack. What do they do? For the former crisis, they diddle. They wait and see. They had to be threatened with defeat in the House before they threw together a sort of plan to meet the crisis banging at the door.

At the same time, they secretly work away at plans to trash our environment by gutting Canada's Navigable Waters Protection Act Doing this will allow all the so-called "minor" rivers in Canada to be dammed, bridged, and otherwise made useless for boating without any review or assessment from interested parties. After all we have learned about gutting the rules for behaving properly in the public's good in our economy and environment, you'd think these people - did I say people? - would get it. But they don't.

I urge Canadians to visit this web site and help fight turkeys...
Posted by Michael at 2:09 PM