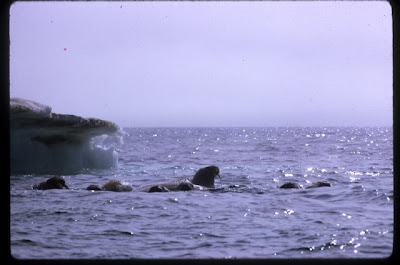 This is an interesting question because generally speaking dead walrus sink making it difficult if not impossible to tow back to camp after the kill. So what did the Inuit do? There are probably a number of options. One would be to carry a number of floats, usually hollowed out seal-skins which are then filled with air. These avataq could be attached to the carcass to keep it afloat during the return trip. Another option would be to cut the walrus into smaller pieces which could be transported either in the kayak in the case of the larger Canadian style kayaks or on the decks of lower volume boats.

When hunting with large freighter canoes in the Canadian eastern arctic, hunters tended to look for walrus either lying on ice pans or close to ice pans. Having a platform to make the butchering easier was important as we'll see in this sequence of photos. This was likely the case in the old days when kayaks were used to hunt. 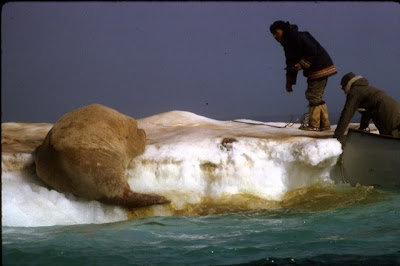 Here a walrus was killed while on a rather high pan of older ice. The hunters were about to secure the carcass on the ice when suddenly it slipped off into the water. At that point, it was decided to pull it over to another lower ice pan before it sank. 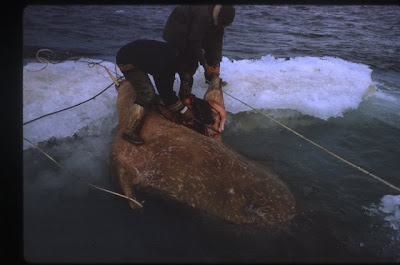 Walrus weigh at least a ton, so pulling one onto an ice pan is often difficult. In this case there was only one pan available and it wasn't very large. To make matters worse the wind was rising. 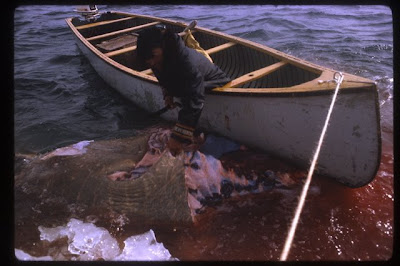 We began butchering the carcass as best we could and loading the two canoes with the meat. I can picture something like this being done had we been using kayaks. 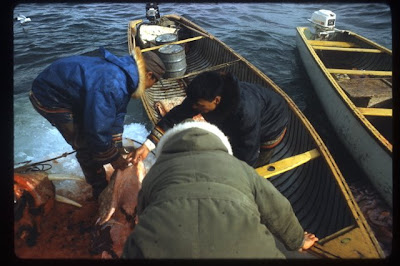 With the rising wind came waves and the small ice pan began breaking up into smaller and smaller pieces... We struggled to get as much meat as possible cut and into the canoes.

Finally, there was nothing left of the ice pan and we were forced into our canoes. I can easily imagine tying the slabs of meat onto the decks of kayaks, or storing them inside the hulls of the larger Canadian style kayaks.
Posted by Michael at 10:20 AM