Fogo - The Island At the Edge of the Earth

"A new tourism commercial (2007) for Newfoundland cites that the Flat Earth society believed that Newfoundland was one of the four edges of the world." so says the Wikipedia's entry on the society. While in Newfoundland, I heard that Fogo Island, on the north coast, in fact, was actually one of the four corners of this flat world. I decided I had to check it out. Wouldn't you? 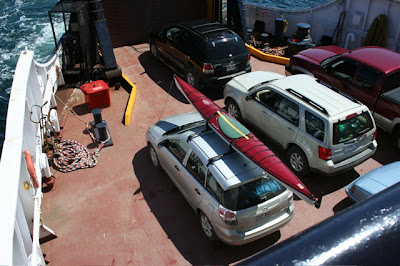 Step one was take the ferry over to Fogo. Had I known how delightful the trip over was to be and that we'd encounter whales along the way, I'd have paddled through the series of islands and camped along the way and on Fogo itself. Next time. 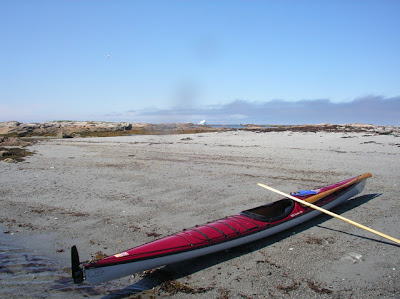 Once on the island, I drove to the Atlantic shore where I assumed the Edge would be located and then spotted an iceberg off of Joe Batt's Arm. I quickly launched from a sandy beach to see both it and, naturally, the Edge of the Earth, which no doubt lay just a short distance beyond. 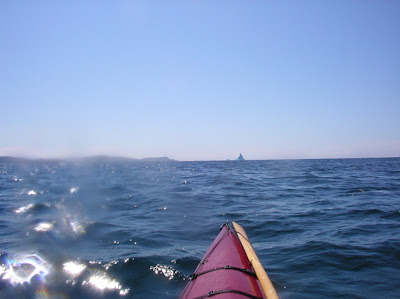 I hadn't gone more that a mile or so offshore when the wind and swell began to kick up and the sea state got noticeably rougher. I was also surprised to encounter a reef so far out with the swell crashing over it. Was I getting closer to the Edge? As well, the iceberg seemed to be moving away from me, like a Siren beckoning me to my Fate... What to do, I pondered? 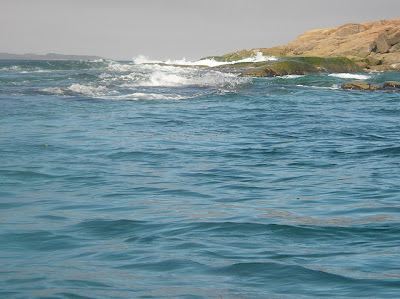 I finally decided not to chase the iceberg any further out to sea and turned back to shore. Coming close, I watched the surf pounding along the rocks while the patches of fog drifted nearby...

There would be other icebergs to chase. Perhaps the Edge of the Earth was closer to the shoreline elsewhere on Fogo. I packed up my things and headed to the eastern end of the island to have a look...
Posted by Michael at 10:59 PM

I'm glad you turned back before you fell over the edge into heavan know what :)