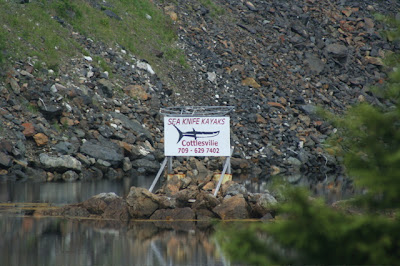 As one would expect given the possibilities the coastline and numerous lakes (often called 'ponds') present to the paddler, Newfoundland has several local kayak builders. While heading up to Twillingate, I saw this sign and decided to check out what was happening in Cottlesville. The community isn't very large and I soon spotted this rack of boats on the lawn of a small house. I stopped and knocked on the front door. 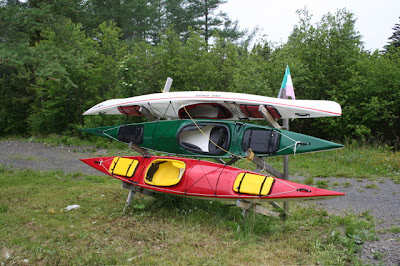 Lindy Rideout and his dog answered the door and we spent some time talking about the boats he makes. I was a bit surprised to discover that the 'factory' was in the garage behind the house and the 'employees' consisted of only he and his wife. Together they make between 50 and 100 boats a year depending on demand. The boats themselves look well made as you'd expect of a small family operation like this one. What particularly struck me was the flat mid section of the hull suggesting a boat that would like to surf down waves. The rocker would permit good manuoverability if playing in rock gardens is your thing. The large hatches seem to beg for an over-nighter or more if you're so inclined. 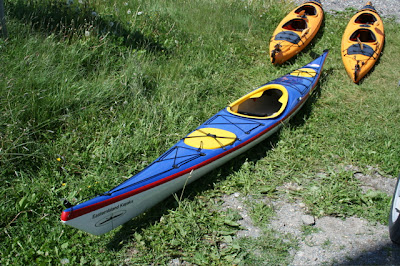 A week or so later, I spotted one of another local builder, Eastern Island Kayak's boats on the beach at Trinity, the famous old fishing village where ships used to depart for the Labrador. No one was around for me to talk with, but again the boat looked interesting and I would loved to taken it out for a spin.
Posted by Michael at 10:42 AM