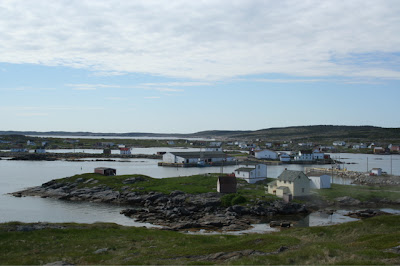 I believe that following where the road leads me often brings wonderful surprises. So after finding no place to stay in the town of Fogo, I drove down the road until it came to an intersection. A road led east. I followed it. On Fogo, there aren't many roads so I knew I come out someplace people lived. Sure enough the road ended in the community of Tilting and the first place I tried had a room for me. It was an old fashioned house, about 100 years old or more, built in the old way with ceilings just above your head, two rooms down and three tiny bedrooms above. The people were friendly and after several days of camping, the beds were luxurious. How could I not stay there? 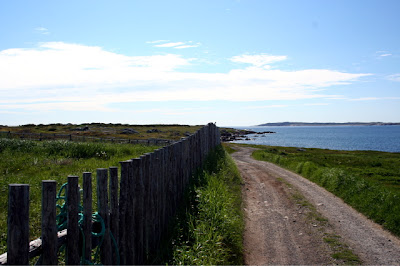 The maps said Cape Fogo, right at the eastern tip of the island. Surely I'd find the Edge of the World out there somewhere. This view looking along the garden fences behind Tilting shows the beginning of the Cape in the background. I prepared for a long day's paddle and headed out. When I finally got to the 'cape', a fisherman told me, "You've a ways to go yet, b'y..." And I did! 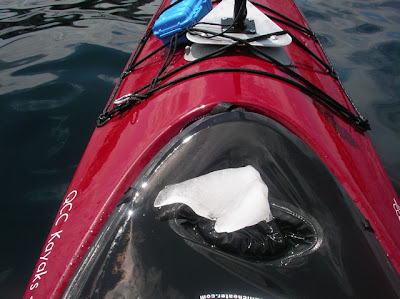 Along the way, I came across a 'growler', a piece of ice, mostly submerged, lying in wait for some poor boat to damage and possibly sink. I broke off a piece by giving it a good whack with my Greenland paddle (naturally) and voila, a taste of Greenlandic iceberg served fresh right on the foredeck! Yummy!

Cape Fogo may have been one of the Earth's Four Corners, but I saw no signs of the Edge. I did see some signs of the old community that had once been located along the south facing shore, but little now remained after the re-settlement occurred years ago. My paddle had taken me along the whole east coast of Fogo, a shoreline of shallow bays, low hills and Atlantic swell and a cape that seemed endless! A great day on the water!
Posted by Michael at 10:50 PM

love the picture of the town. it looks like it evolved out of a hardworking sea-industry, houses clustered on any ground big enough to take a building.
it does look like the edge of the world could be just a short distance away from this small corner.

Tilting was indeed a wonderful place, very attached to its roots and way of life. I'd love to return, stay a while and learn its stories. I'm sure they'd be fascinating!