I don't want to give the impression that I'm just a fair-weather paddler. I do paddle in lousy weather and here is an example of one such paddle out of Avondale, Newfoundland with Rick and Jim. Poor weather, but great company and a little surprise as well! 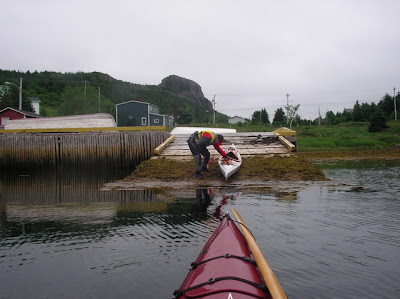 We launched in Avondale off a slippery slip. 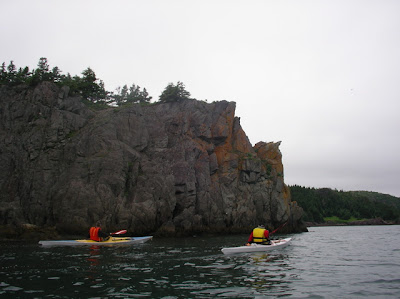 We headed into the fog and skirted the cliffs leading out to Conception Bay. 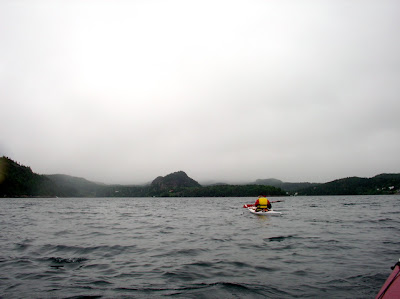 We passed over the shallow bar, which nearly blocks off Avondale Bay from the sea when it dries out. 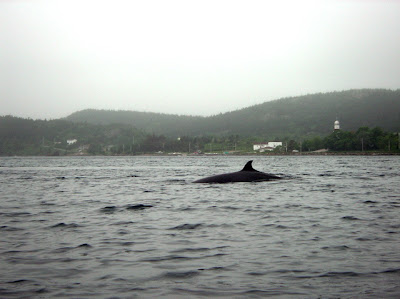 We saw some disturbance on the water and discovered it was made by a whale feeding just offshore. Perhaps, it's two. A mother and baby? Just as I was getting some close in pictures, a large motor boat came along and the whales disappeared, so we never found out. 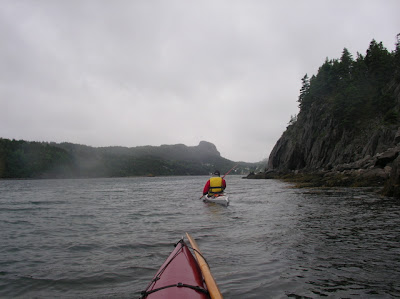 After several hours of liquid fun, we returned to the put-in and headed home for something warm and dry. Lousy weather, great day!
Posted by Michael at 11:00 AM

I'm all for sunshine and calm waters myself! fantastic to see a whale so close by, shame the motor boat scared it away.
I have nominated you for a 'Nice Matters' award.

Claire - It wasn't the boat's fault. It was some distance away and likely never saw the whales. Thanks for the nomination!

Michael,
Been checking your blog occasionally at the Glovertown CAP site (yup, they had to turn Net Nanny off to let me get in :->)),) just back from Eastport for the summer....
Re the Ballyhack paddle...lousy weather???? HAHAHA..that was a perfectly nice day - no snow falling, no spindrift flying, no ice pans in the bay, water so warm you only needed three layers of fleece under the drysuit, and the fog wasn't near thick enough to eat..sheesh, wadda ya want - this is Newfoundland, not Disneyland; if the weather ere ain't trying to kill ya, it's nice by definition!
Regards, and take care out there.
Rick