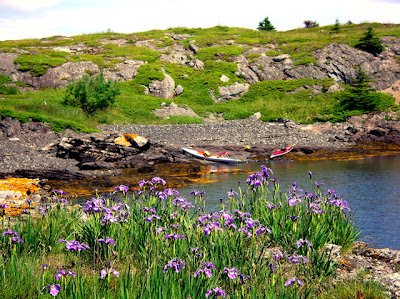 We landed on the tiny beach in the protected harbour of Sailor's Island and started exploring. The first thing we noticed was a willow tree, just above and to the left of our kayaks, which seemed out of place. Perhaps it had been planted by residents years ago. An area just beyond seemed squared off and may have been a garden. 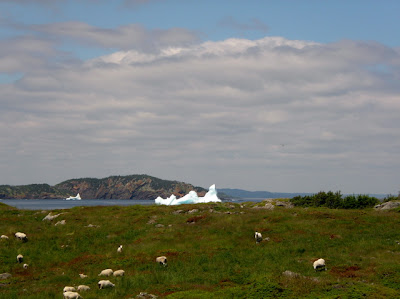 From the water, we could see the summer inhabitants: a flock of sheep, including a black one! It appears that someone has solved their fencing costs by moving the animals onto an island! We also caught sight of the iceberg in the bay beyond and decided to go out for a closer look. I'll post the video of that excusion in the next few days. 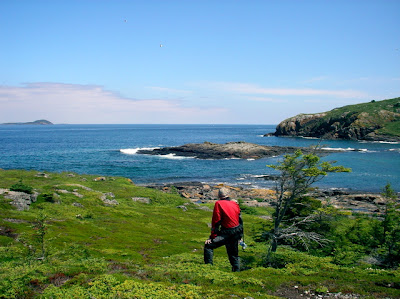 Rick went over to look at the area where we'd seen the swell breaking on the Bonavista Bay side of the island seen in part 2 of the video series. There were several hazards lurking out there for the unwary paddler. We decided it was just as well we didn't go out through the narrows after all. The ground was covered with lots of bakeapple berries slowly ripening. Perhaps they'll pick them in late August when they pick up the sheep. 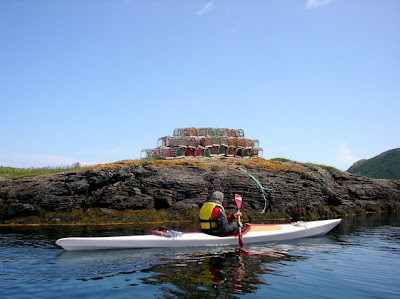 Returning to our kayaks, we left the harbour and paddled past these lobster traps, then headed around the island and out to the iceberg. It was melting rapidly in the sunny warm weather, water came streaming down its sides and bergy bits trailed off to one side as they broke off and sailed away.
Posted by Michael at 12:17 PM

it looks stunning, clear skys and clear water.
can't get my pc to play the videos but I know I have a problem with this somewhere, will have to enlist help.

Oooh, just loving it. And fresh ice for the martini, too!