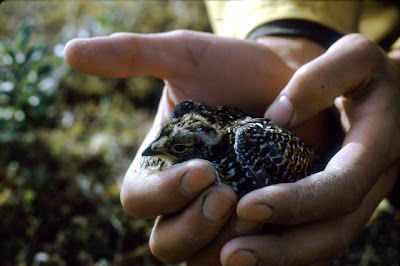 Over the past few years I have met a number of well known people in the world of kayaking. I have been taken by how sincere and welcoming these people have been to me, how they wanted to give of their time and expertise to me, a relative beginner in their world. A few of these people, knowing that I had spent time in the Canadian arctic, mentioned the idea of 'giving back' something to the people who's ancestors designed and paddled the first kayaks.

To them, 'giving back' is a way of returning something to those who, most likely unknowingly, gave them something, which has enriched their lives beyond measure. Kayaking has a way of doing that. So many people have express their thoughts and feelings about how kayaking has brought something special into their lives, far beyond what might at first glance be expected from such a humble craft, primarily created for hunting.

But is hard to 'give back' something to a group of people who have no recollection of giving you something. It becomes more like 'giving' without the 'back' part. That's not to say people who want to 'give back' are wrong. It's only that the context needs to be clear and the act of giving needs to be carefully worked out so everyone feels comfortable with what they are receiving.

I'm looking forward to discovering that 'comfort zone' as I do my little part in 'giving back'. I personally have a hugh debt to repay a number of people who probably are totally unaware they gave me as much as they did first when I was young and looking for a path through life, and then when I began kayaking in my 50's. My present ideas about giving back are as small as this baby ptarmigan as I write, but hopefully they will grow and take off just like this bird will someday do.
Posted by Michael at 6:05 PM

yes there is a whole heap of people in the kayaking world who give freely of their time and expertise. some don't want anything back for the things they have helped you with, they want you to pass it on to others.

Well said, Michael. You have, in a few words, captured a beautiful and important part of our lives.