We all face barriers in our lives, some big, some small. These come in many forms, but are most apparent when in the midst of some sort of challenge we've set ourselves. When they appear, we fret and curse and sometimes we let our frustrations get between us and our chance for happiness. Yesterday I faced one of those barriers... 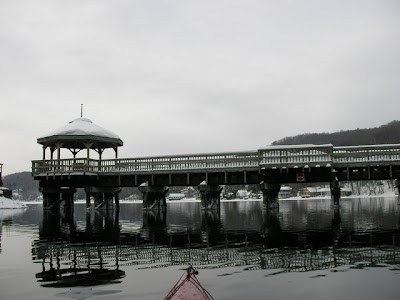 I knew it was there, but I thought, there must be a way either through it or around it. I paddled under the old train bridge and faced 'The Ice Barrier'... 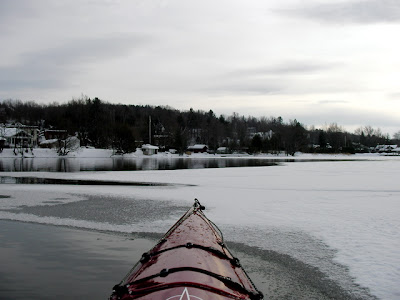 I paddled up to the ice. Surely it was flimsy, just barely holding itself together. Alas, it seemed remarkably solid in spite of its thinness. I paddled from one shore to the other looking for a weak spot. I wacked it with my paddle. It wouldn't break. I was getting frustrated. It was too strong to break, but too thin to walk on safely. 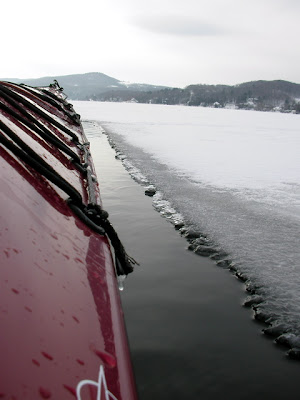 I considered ramming my way through like the old explorers used to do in their stout wooden sailing ships. A closer look at the serrated ice edge changed my mind. My gelcoat would never take that sort of punishment.

I returned to the train bridge and spent some time practicing weaving in and out of the pilings. It was good practice in small boat handling. I began to make up a game with variations: through forward, then backward, alternating the two, skipping every second opening... Well, after confusing the villagers for an hour or so, I retreated down the river to chase the many ducks which live there throughout the winter. I was beginning to have fun in spite of the Barrier!

Update: It seems Freya has 'hit' her own 'barrier' on her circumnavigation of the South Island of New Zealand. In launching and returning through the beach surf, her kayak was damaged and part of a paddle was lost. Thankfully she's not hurt and thanks to spares and her own ability to repair her kayak, she will be able to continue. I understand people are working to replace her paddle and boat clips at the first opportunity.

You have to hand it to Freya, well into her second major expedition of 2007. When things turn against her or equipment fails, she gets tough and solves the problem. No complaining, no blaming, just on with the business of moving ahead. Very classy! Good for you, Freya!

Check her blog link in the right sidebar for details.
Posted by Michael at 8:09 AM

"A closer look at the serrated ice edge changed my mind. My gelcoat would never take that sort of punishment."

You're absolutely right. Michael - and there's more at stake than the gelcoat. I've seen a sailboat which had moved thru skin ice for perhaps half an hour just about holed at the cutwater - right thru thick gelcoat and several layers of cloth and matte. Think of the ice as an endless succession of razor blades...

Sounds exactly like the paddle a few of us did yesterday as we picked our way through huge sheets of ice. Just another paddling experience for those who are willing to go out in the cold.

Great stuff, Michael! Also reminds me of Shackleton's writings and his reference to "the Barrier".

When I saw the word "barrier" it made me think of the time I spent in Venice this year.

They have a dam there connecting the city with the mainland by road and train. For most people that dam is a great facilitator of movement to and from the city in the lagoon. You can now go back and forth by car and train.

Yet the locals refer to it as "the barrier". To the Venetians "the barrier" is not a facilitator of movement, it is an impediment. It cuts off one part of the lagoon from another and force them to make long detours in their boats.

Likewise, your "barrier" might be a fantastic opportunity for someone else :-)