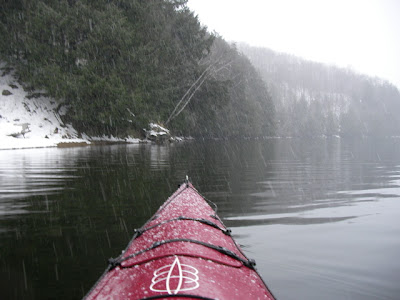 The Holiday Season was a bit like 'A Tale of Two Cities': 'There were the Best of Times and the Worst of Times'. It's probably a 'Far, Far Better Thing' that it's over and I can look forward to moving on into 2008.

On the Best side of the ledger were times spent with friends and relatives, many whom I haven't seen for a while. We also met new friends, several from China, guests of our son and his cousin who had spent much of 2007 in Singapore and other parts of the Far East. I marvelled each time I sat at the dinner table at our ever shrinking world. Young people now live in what has truly become a 'global village'. It bodes well for a better world, I'm sure!

I paddled for the 100th day on Dec 27th, four days before the year ended, thus successfully completing the challenge I set myself on August 28th. Some warm rain and strong winds broke up the ice barrier and allowed me out onto the lake for this last paddle. I met up with a fisher, a small otter-like animal I'd never seen before on the lake and my bald eagle got down-right friendly and flew out to greet me! It was a memorable paddle. Today, the lake is mostly frozen over save for a patch about mid-way down, inaccessible to all but the ducks.

Sadly, as I paddled that day, my wife's last surviving uncle died. He was 83, a marvelous man, the father of three talented children. His funeral reminded us all of the need to be together more, to laugh often, to live fully and to pass along a spirit like his to our children.

The following day, my car was hit by an inattentive driver who failed to negotiate a curve. The resulting crash put both our cars out of commission, but thankfully no one was injured including my 91 year old mother who I was taking to town.

I'm ready to finish this 'book' and read something a bit lighter and more adventurous! Skiing anyone? Snowshoeing? Warm water paddling...?
Posted by Michael at 11:08 AM

You've got some strong genes there, Michael. Sorry to hear about the prang, but the family time sounds just fine. Welcome back.

Congrats on the 100 days! I don't think I'd have a shot in heck with the job I have now.

I've been getting a yen for warm water myself. Didn't help that I was browsing through my photo album from a BVI's sailing trip back in 2005. That was one of the more perfect vacations I've ever had.

Good to see you back, Michael. Sounds like life treated you to some rapid fire reality. Hopefully, it is out of the way and the rest of the year will be full of joy and good deeds. If you head south, let us all know about your plans.

Congrats on the 100 days of paddling! A worthy goal! Like yourself, I now find myself skiing when I would normally be paddling. It is still good.