Many of you have FaceBook accounts, so you already know the vast amount of curious things that can pop up on that part of the World Wide Web. I recently saw some 'Curious Kayak' photos posted by a fellow named Marc Setó. I must say he has collected some interesting approaches to the sport. Here are a few examples stolen from his collection... 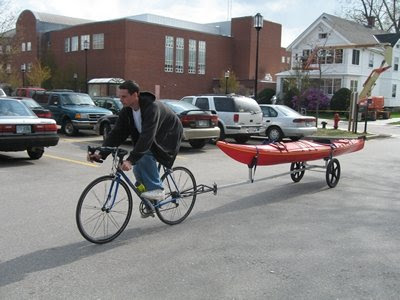 I liked this one for it's simplicity. A man, his bike and his kayak. Oh if it only were so simple! I've toyed with the idea, but living about 10 km from the nearest water and seemingly up hill both ways, I fear I'd seldom get to paddle very far. Still it's a good option for those who live in a water-side venue. 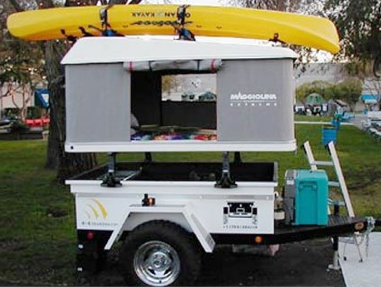 Now this camper is a serious answer to the kayak/car/camper dilemma. I'd seen the little roof-top popup campers, but didn't go for one because I hated the idea of climbing a ladder to the rooftop of the car (or heading down it at night for a pee...). This guy has neatly solved that situation by mounting the camper on a small trailer. He gets his tent with the bonus of some useful storage room underneath for his gear. I think I would have mounted the camper directly on top of the trailer for a bit more security... 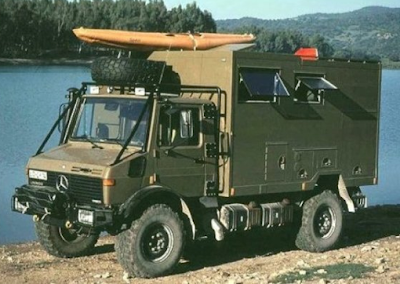 Finally, for those of you interested in the Tundra phone mentioned in the yesterday's post, here is your transport vehicle. Tough, rugged, very macho looking, the perfect solution to those into 'commando kayaking' (sorry Dubside, I know it's not your style...) in the wilder parts of the world.
Posted by Michael at 9:16 AM

I favor the bike method...for those withing a reasonable distance of the water. Around here, however, I'd have to chain the thing to a lamp pole or something to be sure it would be there upon my return.

LOL That why people opt for the Mercedes Kommandowaggon!

I've seen a white-water kayaker carry his boat on his shoulder as he pedalled towards the Lachine Rapids in Montreal. From his comportment, it looked like he was used to doing this, although I am sure that this is not a recommended transport method.

no horse drawn? well thats something to work on then. . . .

I dislike driving, so I love the bike idea. However... the hills won't nearly be as fun with a 16ft kayak trailing behind you.