Dancing With My New Partner: GPS 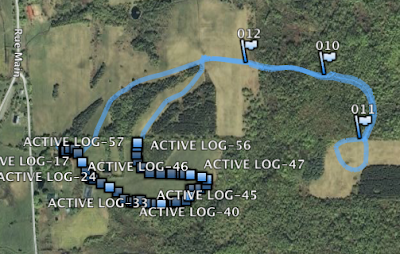 The picture above, yesterday's cross-country ski trail, is my first attempt at using a GPS track and layering it onto a Google Earth map. Yes, the rumours are true, I've decided to modernize and get a GPS unit to assist in my navigation when out kayaking. I've always been comfortable using map and compass and probably would have stayed with that system alone, but last spring I discovered when paddling among the thousands of islands in Georgian Bay, there was a disconnect between the maps and the reality. I first discovered these map errors when paddling around Manitoulin Island a few years ago, but this time the lower water levels in the Great Lakes served to alter the map to the point where, at times, I could recogize nothing. I was 'lost' or so it would seem for short periods of time until I paddled on to a point on the map I could recognize again.

I have discovered there is a learning curve in order to use the GPS unit. It isn't totally intuitive. For example, it took a while for me to realise that in order to see the latest recorded track, I had to 'clear' the previous track otherwise all previous tracks would simple be tacked together into one long track. Another discovery was that no Mac software was available from the manufacturer to allow track management to be done on the computer. Anyway, I'm having fun slowly learning and finding software out there on the Web which has got me to the point seen in the picture. Now I have to figure out how to remove all those pesky 'active log' letters and numbers from the track. They are nice, but I don't need that sort of detail just to post my track.

There's lots to do for the paddler frozen off the lakes until the spring thaw comes. By then I ought to have got this GPS stuff all figured out!
Posted by Michael at 9:01 AM

Welcome to the dark side. Once you've worked past the basic familiarization stuff, then you can get into GPX and all the third-party utilities that use that format. I have Garmin 76Cx, with a 2-gig card (replacing the 128MB they supply), and have loaded it with Garmin's nautical maps, the city maps, and third-party topo maps. Unfortunately, you can't use all three simultaneously. There are also limitations in terms of how many waypoints you can keep in the device. So, I've built up a library of waypoints and POI's on my PC, and download to the device on an as-needed basis.

Another interesting source of info is the "Carte InfoKayak" from www.kayakdemer.net where many people have added their local knowledge. I've incorporated many of these into my own GPS POI pool for future exploring.

Once you become comfortable with the unit, you will have so much fun with it. Everyone says to not become reliant upon tech, but the GPS just makes things easier. If you plot a route for a trip, even if you know it already, the unit will give you very accurate ETA's.

Simplifies many tasks, its also nice to get that visual on Google Earth of where you were exactly.