Having done some exploring in the Killarney area of Georgian Bay last spring, I wanted to keep at it. Years ago I had sailed out of Honey Harbour to Killarney (and beyond) so it seemed natural to return and see what had changed over the years in the southern end of the Bay. 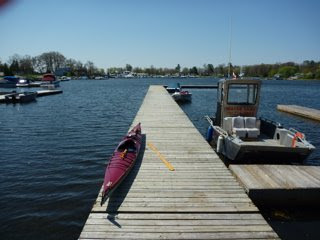 To begin with, I didn't recognize Honey Harbour at all. I even put in at the wrong place and once out in the water I found myself lost and disorientated on the map! The GPS put me in a totally different place than I thought I was (The public dock I thought I was at was actually another mile or so down the road from the little park I chose to launch from...). A great start to a multi-day paddle. To make matters worse, the wind continued to build all morning until my pace slowed to a a crawl. I decided to start over! 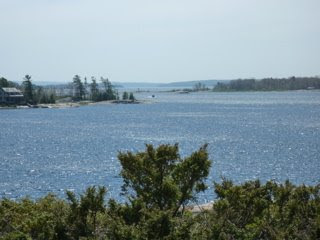 Turning around and surfing back towards Honey Harbour gave me the time to sort out my position and reach less turbulent waters. I entered serious cottage country, the summer playground of Toronto's fashionable folk. I found a maze of channels and slowly began to recall sailing in the area. It had been my first experience navigating narrow channels, ticking off buoy numbers on the chart as we made out way westward. 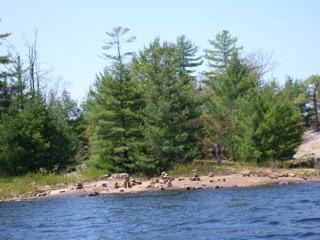 One new item was this Inuksuit beach. It looks as if a building class had been held to teach people the art. This business of putting up little stone men comes from the Inuit and in recent years seems to have captured the imaginations of southern Canadians. I suppose by now this class of builders has spread through cottage country to erect their very own stone men next to their cottages and boat-houses.
Posted by Michael at 8:22 PM