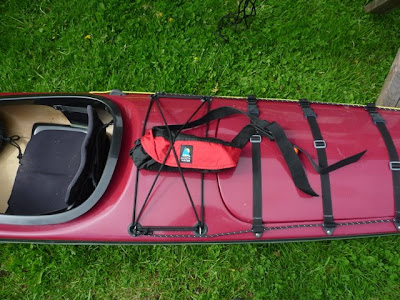 One of the clinic sessions I took while at the Palmer Rapids kayak weekend was 'Rescues'. I wanted to practice using my North Water tow line, so the instructor agreed. We'd all practice a few tows and then we'd get rescued.

At first all went well, but then problems began to surface. My boat has a rudder. The rudder is operated via cables which attach by bolts secured with split-pins. One of these split-pins snagged the tow line rope... Now in a class, this is an easy thing to remedy, but out in a real tow situation, maybe it wouldn't be. Maybe the only solution would be to attempt to retrieve the down-stream end of the rope and try pulling it loose, or, in the worse case, I'd have to wet exit and free it by hand. No amount of paddle prodding would loosen the thing from the cockpit.

My next practice tow went well until I released the tow line using the quick-release. The bag with the extra tow line slipped off my waist as I paddled ahead and dragged along the rear deck where it then got caught in the rudder mechanism! Once again, I was unable to unfasten the bag and had to be 'rescued' by my tow person. Next time, when I undid the tow belt, I tossed the bag off to the side insuring it was free of my boat.

Another paddler used the bag before stuffing all the line back into the bag. After hooking on to her tow and paddling forward, she discovered the line had somehow managed to wrap itself around her boat making it impossible to tow anyone. Once again, the line had to be untangled by the towed boat, not something you'd want to do in a real-life situation.

It pays to practice with the so-called safety equipment we buy. The purchase alone does not guarantee you'll be safer with it on board. Knowing how best to use the stuff can be critical! Get out and play. You'll be glad you did!
Posted by Michael at 3:59 PM

in complete agreement about the practicing.
glad you're out there playing!!

Being able to tow is an unselfish skill. I'm going to start practicing that this year and your post will prove educational, thanks Michael.

Just got a tow belt, after a certain-person-who-shall-remain-nameless needed a tow coming back into Chance Cove in the teeth of very, very stiff southeaster. Another person-who-shall-remain-nameless wasn't able to oblige, as he had no tow belt, and had managed to get some distance ahead of the first peron-who, etc...haven't heard the last of that one yet, LOL. Maybe we can do a little practice when you get down this summer...

Thanks for posting the good, the bad and the ugly of it all.
Sharing is caring !