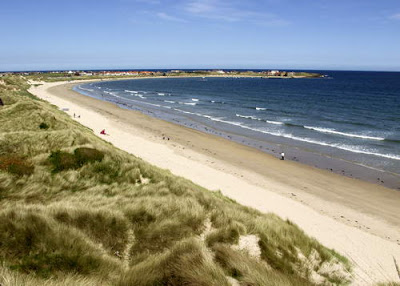 Recently a fellow named Peter Bailey from Alberta, Canada was wondering where he might get his dinghy out for a little row, or perhaps, even a sail. Like a lot of people he went and looked up some local tourist information and found a picture much like the one above. A lovely beach, complete with dunes and only a few miles from home in his home province of Alberta.

But wait a minute... Alberta doesn't have a seacoast, he recalled. So where was this place? It turns out it was Beadnell Bay, Northumberland, in the British Isles, 8000 kms away! When he contacted the tourist people about the use of a non-Albertan photo in their ads, he was told, "Albertans are a worldly people...". Another comment was, "It wasn't an attempt to mislead. The picture used just fitted the mood and tone of what we were trying to do." This last statement came from Prime Minister Stephan Harper's office... Am I surprised by that statement?

When asked to explain why they felt the need to use foreign photographs to advertise Alberta, the Edmonton ad agency which had stolen the picture off the net and used it falsely, commented that they couldn't say, "because of the terms of the government contract".

By the way, I stole the photo from here. I'm sure it's a lovely place to take a dinghy and maybe even a kayak! Sure beats Alberta's Tar Sands project!
Posted by Michael at 7:12 PM

Caught the bastards in the act. Good for you.

Try Newfoundland - we've got a few vistas worth aiming your camera at down here...and who'd want to paddle Alberta anyway????