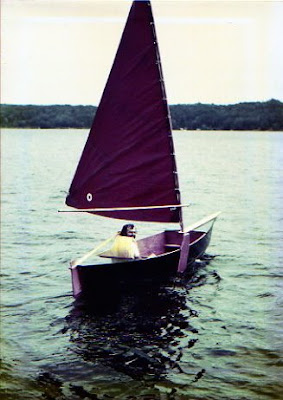 Nearly 25 years ago I was told that to live well, it was important to raise a child, plant a tree and build a boat. So I did. I was into sailing back then and turned to a sailboat design of Phil Bolger as the boat to build. A man named 'Dynamite' Payson offered plans and I started to build. The design is called the 'Surf' and in the photo above I sailed her for the first time.

I had such fun in this little boat, I began looking at more of Bolger's designs. I bought plans for his folding schooner and considered buying a Dovekie sharpie sailboat for a while.

Phil was a guy who delighted in looking at new ways of doing things. Some of his hundreds of designs would leave you with your head shaking, but most of them worked and were easy to build. I will miss him, knowing he's gone and no longer producing quirky, intriguing designs for those of us who like to live on the water. More information about this interesting man can be found here.
Posted by Michael at 12:17 PM

I too admired Phil Bolger for his designs and his simple approach to boating and life. I built a 12' double ended sailboat (looks like the one in the picture!) from his book of designs entitled 'The Folding Schooner' and my wife and I considered buying a Dovekie too. He will be missed but not forgotten!