Say It Ain't So 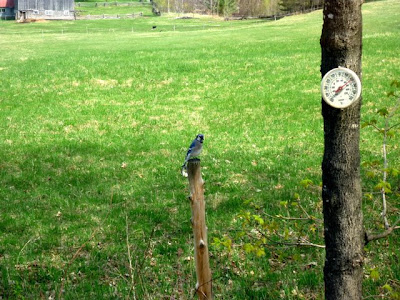 I bought myself a new waterproof camera last week. My older camera, a Pentax Optio 43WR is now five years old and going strong, but I just know, I'll be screaming you know what when it suddenly decides to let me down. The new camera, a Panasonic DMC-TS1 has almost three times as many pixels and shoots video in AVCHD format which I like. The picture above is one of the first shots. 'Blue Jay at Rest'... LOL

But that's not today's subject. Yesterday I finally remembered to take my GPS device out for a paddle. The day was chilly with a light breeze, so I decided to have the GPS give me an idea of how fast I paddle using various strokes (I use a homemade Greenland style stick). It turns out my everyday cruising stroke moves me along at 6.0km/h. If I turn into the wind, my speed was reduced to around 5.8km/h. Turning down wind, it bumped up to around 7.4km/h. This was about what I had anticipated given what I know from past experience. So far, so good.

When paddling around Manitoulin Island a few years ago, we encountered days when we'd paddle into large waves and steady headwinds. After several hours using the same stroke, muscles screamed for a break, but being far from shore, stopping wasn't an option. I began experimenting with a variety of strokes which used slightly different muscle groups in different ways and found one stroke which I particularly liked as it seemed to relax my muscles and move the boat ahead with less effort. Yesterday I had the GPS examine it. I was shocked! My speed dropped to 5.7km/h consistently! I played with getting everything right, but the speed seldom reached 6km/h and never went above it as I thought it would. Not so good, but I still like the stroke a lot and use it when the going gets tough. The way the paddle cuts into the water feels so right, it's hard to think it isn't faster!

Putting more torso rotation and stomach muscle into my strokes would bring the speed up slightly above 6.0km/h, and using the 'canted' stroke with more emphasis into pushing down on the paddle with the upper arm, would move the kayak along at up to 6.8km/h consistently and up to 7.1km/h for spurts. This is clearly the fastest stoke I have in my arsenal.

It was an interesting day on the water!
Posted by Michael at 11:09 AM