I had been advised by the Forrillon Park guides that I would be better off launching and paddling my kayak from the south side of the peninsula, but being one of the stubborn types who needs to see the evidence first hand, I drove around to see what they were talking about for myself.
There is a small marina basin on the north side a few kilometers from the peninsula, which looked ideal for launching. I drove over and indeed there was good parking, and a decent wood-lined concrete ramp extending into the sheltered artificial harbour. Once out on the sea however, I could see some possible problems. The open bay was exposed to the full blast of the Gulf winds, and one could easily end up having a long slog back to the shelter at the end of the day. The steep beaches along the way tended to be exposed to dumping waves and many rocky shoal areas extended just offshore making them tricky areas for landing in an emergency situation. On a calm day, the nine kilometer paddle out to the tip would be easy, but I was concerned that, with changing conditions, the chances of being trapped against the cliffs with no possible exits was too great, especially as I was going solo. Paddling with others tends to bolster one's confidence or at the least gives one the impression that they might be available for a possible rescue attempt!
The park maps suggested another launching possibility lay closer to the peninsula itself, so I checked it out next. As I arrived in the parking lot, I was gratified to see a number of other paddlers preparing themselves to head down to the beach. That meant getting into their wetsuits - none had dry suits - and so on and preparing their boats and gear for the carry to the beach. 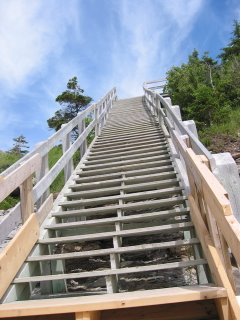 I chatted briefly with them and headed down to the beach to look it over. A little trail led from the parking area into the trees and towards the beach. After a short walk and a dozen or so stairs I arrived at an overlook area with the beach still far below me! It turns out that this overlook was still about a 100 steps above the beach via a double set of the steepest stairs I've seen in a while. Obviously the other kayakers had decided this presented no obstacle to them as they already had one boat on the cobble beach below. They were moving them several people carrying at a time! 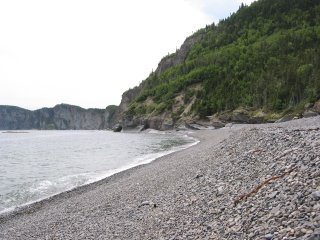 Down on the beach itself, the dumping waves and the steepness of the beach began to turn me off bothering to carry my boat down. I shuddered at the fun it was going to be getting back up those stairs especially with the wind that was already blowing! Somehow, I decided, there must be an easier way for an older guy my age to enjoy a paddle out to the point without begging for help getting my boat to and from the beach and without providing a cardiac festival for those innocent folks enjoying themselves on a tourist beach! 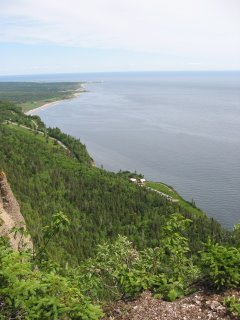 Instead of paddling I decided to hike to the cliff summit and survey my new domain. That walk proved to be a fun outing as the view from the top was spectacular. By the time I got to the top, the kayakers - in three doubles and a single - were making their way along the cliffs out to the tip. From the heights they looked small and fragile out on the waves! I began to wish I'd got their help carrying my boat down the stairs...
On my way back down the trail I began to notice small signs marked SIA/IAT. Suddenly it dawned on me! This trail was, in fact, the end point of the famous Appalachian Trail which begins far to the south in Georgia and recently became international by extending from Mount Katahdin across Maine, New Brunswick and ending here in Quebec at Cap Gaspé. Oddly enough, my sister lives at the other end of the trail! 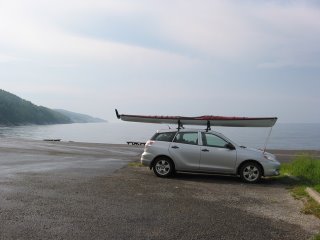 Returning to the car, I drove around to the south coast, got a camp site and headed out to see what the launching prospects were. It turns out they were perfect! Close to the water, an easy carry, a sheltered bay, and a parking lot where changing wouldn't provoke a 'nude-man-caught-in-the-parking-area' type scandal as it seemed nearly deserted most of the time. My kind of put-in!
Tomorrow I'll write about my first trip out to the point and the interesting conditions I discovered out there!
Posted by Michael at 4:10 PM