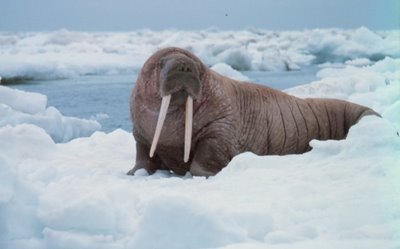 I'm finally ready to motor down the road to adventure. I've done with "speaking of many things," the walrus said, and want to get paddling some place wild and new like I've been promising myself these many weeks. So Monday is the big day. I'm on the road again (that could be a song title, don't you agree?).
Speaking of walrus takes me back to 1969 when Neil Armstong stepped onto the moon. As he did so, I was on an ice pan in northern Foxe Basin with a man named Qaminaq. We'd made a supply run into Igloolik a few days earlier and were now returning back to his hunting camp at Iglujjuaq about 70 miles away. It was a beautiful sunny day and as we traveled in his large 24 foot freighter canoe the number of ice pans began to grow in number all around us. Before long, we were weaving through the few open water leads between the ice pans, wondering if we'd make it back to camp that evening. Then around mid afternoon, we spotted some walrus hauling themselves out onto a large pan of ice ahead of us. Qaminaq shot one of the animals and we began cutting it up to take home with us as both his family and the dogs in camp were getting short of food. Suddenly he slit open the stomach and out onto the ice poured a pile of freshly shelled clams which the walrus had been eating only moments before. We didn't hesitate! Rinsing off the gastric juices in some fresh melt water on the ice pan, we feasted on the clams. They were excellent, and not a speck of broken shell to break our teeth on!
While finishing getting all the meat into the canoe, I looked up and noticed the moon in the sky and it hit me. I had learned the news while in Igloolik that Neil Armstong was due to step onto its surface that very day! Thinking back, it was a big day for both of us: his on the moon and mine being fed by a walrus. How marvelous life can be for those willing to live through adventure. Certainly for me, it's a day I'll always remember. I'm sure Neil feels the same.
Qaminak was less impressed. He's heard many stories about people visiting the moon from Inuit shamen over the years. That there was a man walking on the moon while we ate our clams was not really a day to remember! How naive and cloistered I felt in my ethnocentric ways!
We made it to camp about 24 hours later after spending part of the time sitting in dense fog, surrounded by ice only about 100 yards offshore of the camp. We could hear people talking and doing things, but because the fog was so thick, we had no clear idea where they were and no way to reach them! We could hear them complain to us of having little to eat and yet just a moment away in times of good weather, we had a ton of walrus all to ourselves. Life can be full of opposites sometimes.
Posted by Michael at 1:32 PM

Amazing story. I will always think of this every time I eat clams in the future.