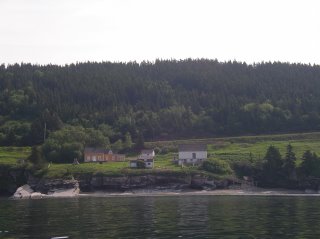 Returning to my new put-in venue ready to paddle at last, I quickly changed and launched. The whole peninsula is part of the park and was originally settled by people coming over from the Jersey Islands. They established fishing operations off the few beaches and tiny farms on the meager amounts of arable land above the nearly continuous cliffs. Today a road run behind the farms, but it didn't in the old days. The isolation was complete except for a few tracks through the hills to neighbours and of course the open sea.
The weather was partly overcast with a moderate headwind as I made my way eastwards along the shore. I was constantly intrigued by the layered geology of the shore. The layers dipped into the water and here and there opened up little coves, caves and cracks for birds to nest in. The weather was very unsettled. Winds kept gusting down off the steep land on my left and would try pushing me out to sea. 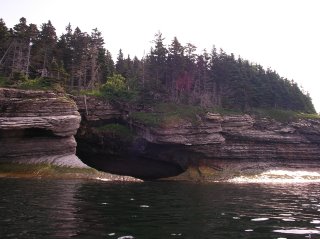 Eventually, the farm buildings gave way to more rugged, forested areas and the cliffs rose higher and higher. I began to feel the ocean swell rolling towards me. Out to my right, I could hear the breathing of whales and finally could see their backs rolling as they paralleled my progress towards the point. Too far away for me to identify, it was fun to know they were out there keeping an eye out for me.
Suddenly, I realised I was at the tip! It was announced by a blast of air coming around the last huge cliff which pushed itself high out of the water above me. The wind blown waves coming perpendicular to the swell became quite unsettling making me wonder how wise I was to continue much further. I turned towards the cliff nearest me and found some shelter just off its base where I had only the swell to deal with. From here, I could see the waves flinging themselves on the weed covered shoals off the tip. It was a powerful moment as the sea put on a show for me. I had the best seat - the only seat - in the house! Seals began appearing here and there. I was amazed at their daring, darting into the white foam over and over again seemingly invincible. 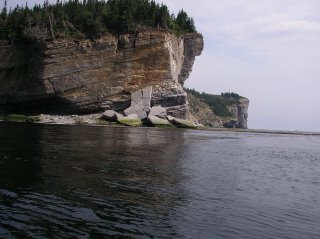 Again I considered trying to 'round the cape' like a good adventurer should, but the more I watched the conditions, I knew it was pushing my abilities over the edge. Reluctantly I headed back to the put-in with the idea that I could try again another day. 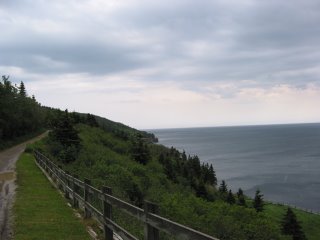 Once I'd dried off and changed, I couldn't help myself. I had to go out again and see the wind and the waves. This time, I chose to take the hiking trail out. Part way there, it began to rain and as I got higher the wind became more and more of a factor. I was glad to have got off the water when I did. 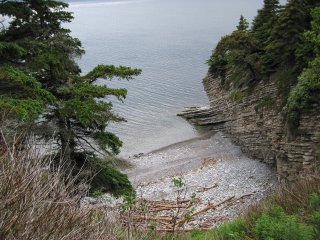 At the trail's end, I came to an opening to find a lighthouse! I'd never noticed it from the water, probably because I was too close to the cliffs to see it. A good sized sailing ketch was coming round the cape under reefed sails. What a fun time they were having!
Huddled together in the only sheltered spot at the cape was a mixture of nationalities, France, England and Austria were all represented. None had comfy rain gear like I was wearing. They must have had a chilly walk back to the parking area several kilometers away! 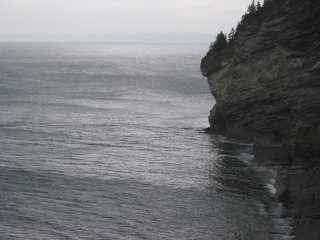 I went part way down the cliff face to a lookout to see the area I had just been paddling in. Again I watched the seals playing in the waves and was impressed by the crashing waves as they blasted over the shoal waters just beyond the cape. I could see the sheltered water I had stayed in while trying to decide if I was up to venturing into the fray. I'm glad I stayed put!
Tomorrow, I round the cape under quite different conditions!
Posted by Michael at 11:19 AM

live to paddle another day. .

just catching up with your adventures, I am always more wary of conditions paddling alone.
and I definatley dont like the look of that ladder, I am not sure I could manage it without a kayak!!

And that's only the lower half of those stairs! They definitely weren't built with me in mind!