I went for my customary paddle this afternoon, down one side of the lake, under the two bridges - a tight fit with the water being so high - then return, under the bridges, this time against the current, up the far side and back to the put-in. Remember those people drinking on that low-lying restaurant porch on the river a few days ago? Unbelieveably, there were people there today, having drinks on that porch who had actually waded out to their tables! Mind you it was 34°C in the shade this afternoon, so I suppose a person would go anywhere, do anything for a drink!
I chatted with a teaching colleague of mine as well. She was sitting on a dock near her river home. She has been snubbing me for over a year now because she claims that I kissed her improperly... I had taken advantage somehow. It seems that I had overdone the Quebeçois tradition of kissing people we meet on both cheeks. I had no idea until today of where I'd gone astray with her, but we seemed to have straightened that misunderstanding out. Some days, it pays to paddle!
Next I came upon this old boat. It's been lying in the bushes for about a year now. I wonder why no one has what it takes to get rid of it? Why isn't it a cool, hard to find kayak? I'd gladly tow it home and fix it up. I guess old boats aren't that cool. 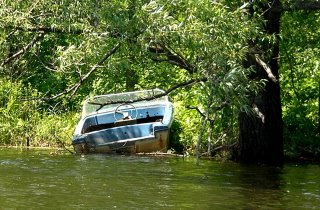 Out on the lake again to find the wind had really picked up. I got to slog my way upwind as the waves began building and cresting. Given the heat, it was a fun wet ride. I began to fantasize about being on an expedition again. Would I make it into a quiet cove at the day's end, or would it be an unceremonious dumping on some rocky beach like Chris Duff got in New Zealand, the one that smashed up his boat? Well, as you can see I made it home in one piece, the boat ready to paddle another day.
Posted by Michael at 6:50 PM

she's a brave one that Wendy!