Returning from my hike to the lighthouse, I reached my parked car about mid afternoon. The rain had ended and the winds had nearly abated. The yacht I'd seen at sea rounding the cape was now lying becalmed well within the bay, her sails barely drawing, with her sailors trying to catch the last remaining wisps of breeze as best they could.
Rather than try heading out to the point the following morning, I decided I would drive around and sight-see a bit and then try my luck paddling out in the mid afternoon of the following day. It turned out to be a good choice. I launched at 3.30 pm and headed out once again towards the cape. The winds came and went, sometimes coming from ahead, sometimes pushing at my back, never constant, but always strong and gusty. Finally, the skies cleared and the sun became a welcome change from the previous day's rain.
I paddled past the now familiar cliffs and coves still amazed that people would come so far to live in what seemed to me to be a harsh and almost cruel land. What was it that pushed them and made them work so hard in this new land? What were the rewards for their toil and isolation? I wondered what they had left behind... 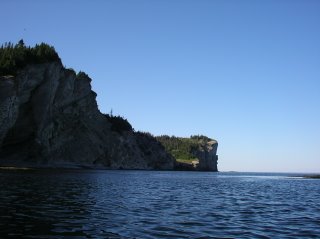 As I neared the cape itself, the winds died away completely. I found myself on a totally calm sun dappled sea able to paddle wherever I wished! The madness of the day before was miraculously gone. How could all that fury disappear so completely?
Seals welcomed me as well as guillemots, cormorants and sea gulls. 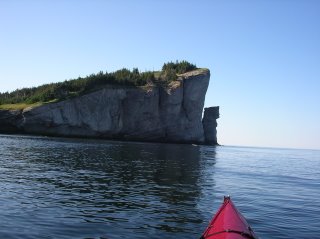 I paddled round the cape and headed down the north side. The smooth shearness of the cliffs was so awesome a sight, especially when I was able to paddle right up to their immense walls and then reach out and touch them. 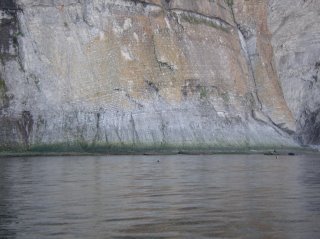 The seals made the most interesting howling sounds, which at first I took to be some freak of the sea blowing in a cave or something. Very eerie, like sea-wolves, but not quite! 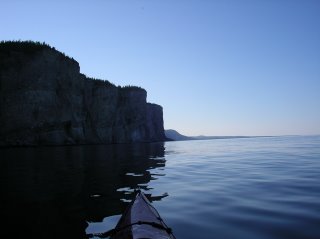 I didn't want to head back. I wanted to paddle on forever, but after about an hour exploring, I turned and made my way back around the point to the southern coast and headed towards the car, about 10 kilometers away. 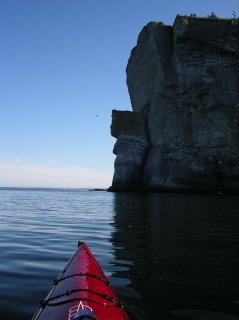 I noticed jellyfish pulsing along with me, heading who knows where. A whale surfaced about a 100 yards off my bow, but finding me, chose to leave me as mysteriously. What is it about whales? Why do we envy them? 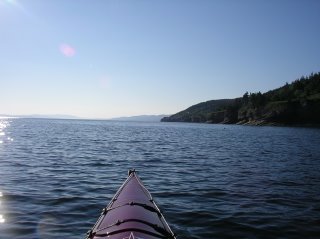 I was back at the car about 7 pm and began thinking about what to cook for diner. What about fettuccine with shrimp and a little white wine? Sounded good to me!
Tomorrow, I head to Percé Rock and Bonaventure Island two bays to the south of me.
Posted by Michael at 2:41 PM