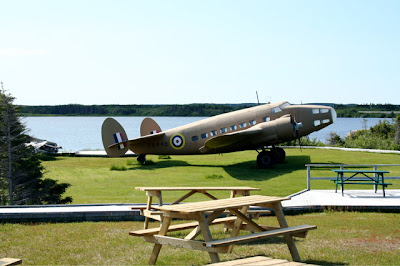 When I was a child, my parents would sometimes visit Lady Banting and have tea. I'm not sure how they knew her, except we lived not too far away from where she had a small estate near the Quebec - Vermont border. We children would be invited as well and it was always a fun time going through her barns and seeing all the old stuff that was kept in them: horse carriages, ageing farm equipment and so on. I always wondered where Sir Frederick Banting was and why we never saw him. He was the co-discoverer of insulin and quite famous, but never there.

As an adult I found out that Sir Banting had been killed in an air crash, but again I knew no details.

After leaving Fogo, I happened to camp near Musgrave Harbour on the north coast. It was there I found this memorial to Sir Banting and his comrades. They had been killed when their plane, like the one in the picture, crashed about ten miles inland just as it was about to head overseas during World War II. Unexpectedly, the questions I had wondered about for over 50 years were answered. It was heartwarming to think that a small Newfoundland town recognized the importance of perpetuating Sir Banting's accomplishments, but it also begged a question: what have I done for humanity that would deserve a similar honour? Interesting thought for each of us to ponder on, isn't it?
Posted by Michael at 9:17 AM

what have I done for humanity that would deserve a similar honour? Interesting thought for each of us to ponder on, isn't it?

I would think giving our children the values our world needs in this time, would be deserving of honour .. there would be no plaques, or memorials. But deserving just the same. More than likely Sir Banting had such parents.

I suspect you have affected more lives in more ways than you can imagine.