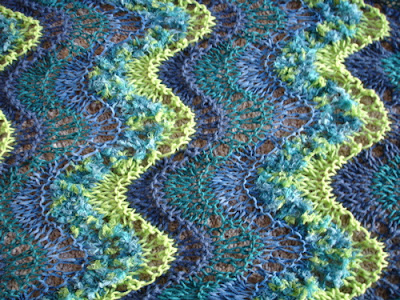 There was a fair breeze blowing down the lake today as I headed out. I'm at my river-side launch site now so that means a short paddled up-stream, ducking under two bridges and thence onto the lake proper. Just at that spot, if there are waves coming down the lake bouncing off a sea wall at the end of the lake, you can encounter a patch of standing waves or clapotis. I tried looking up this term in my dictionaries and on Wikipedia, but none of them cares to define what it means for me.

However, one does get some interesting knitting references and pictures, like the one above on Google. I like this one for its sea colours and waves. It even got me thinking things like, "Knit boat you got there, me boy!" and "Knit pearl ya did in that wave there, fella. Do another!"

In any case, I got through the knarly bit of clapotis, didn't hit any of the bridge abutments and headed into the wind and waves without flipping over or scaring myself too badly. I checked on my poor goose, but didn't find anything, not even tracks. After playing in the waves for a while the wind began to taper off and the waves began dropping so I headed back to the river and home. The caplotis had disappeared.

too much laughter to type