Now the leaves have fallen off all but the most stubborn of the trees, it's possible to see into the forests which cloak the shores of my lake. While no new cabins have 'appeared', a few that I thought must have been removed have now become visible. The owners paint them in very discrete colours allowing them to blend into the forest perfectly. At least one of these 'invisible cabins' is located on a sliver of land that doesn't seem to 'exist' on the official registry! It appears that the original surveys of the area, being somewhat less than accurate, resulted in a small sliver of land being omitted by mistake. A few years ago, someone noticed the error and has now erected a little cabin in 'nowhere-land'. Very clever of them as they now 'own' lakefront which is not taxed and was never paid for because it doesn't official exist - yet! 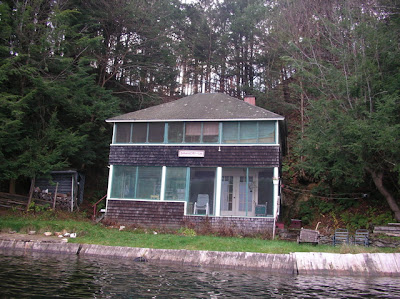 Enlarge to read the house sign.
This 'paradise' situation brings to mind another place named after the fabled land of Shangri-La. The only access is by water or by footpath. No electricity, no phone - not even cellular - and few visitors. The perfect get-away, but this one's on the tax rolls! 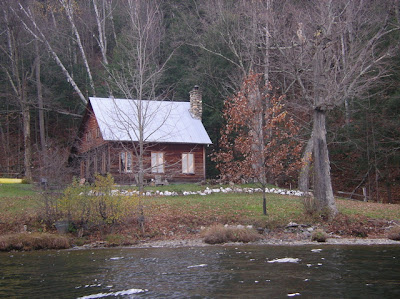 Another similar place, in the bay where I've been seeing the bald eagles, is this one above. It has all the appearance of an early settler's homestead, yet looks comfy and cozy. There's even a kayak lying next to a canoe just above the beach. Perfect!

they look beautiful places to stay. it would be faublous just to go outof your front door and put into the water just there

How wonderful; and how lucky some folks are.