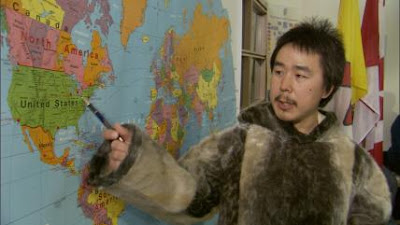 Qallunaanik Piusiqsiuriniq is Inuktitut and means 'Why White People Are Funny'. This is the title for a new film in The National Film Board's catalogue. The film examines the culture of 'white people' from the point of view of the mythical 'Qallunaat Studies Institute', an Inuit research group located somewhere in the Canadian north.

Here is what they publicity has to say about this ground-breaking documentary film -
Funny? What's so funny about white people, otherwise known as Qallunaat to the Inuit? Well, among other curious behaviours, Qallunaat ritualistically greet each other with inane salutations, repress natural bodily functions, complain a lot about being cold, and seem to want to dominate the world.
This docucomedy is collaboration between filmmaker Mark Sandiford and Inuit writer and satirist, Zebedee Nungak. Zebedee is CEO and head researcher of the mythical Qallunaat Studies Institute (QSI). According to Nungak, "Qallunaat ought to be the object of some kind of study by other cultures. The more I thought about the way they have studied us over the years it occured to me, why don't we study them?"
In its use of archival clips, Why White People Are Funny pokes as much fun at the illustrious history of NFB documentaries as it does at society in the south. Of course, well before the NFB came into existence, and at least as early as the classic 1922 feature "Nanook of the North," white society has been fascinated with native subjects, studying them as exotic specimens, documenting their cultural and social behaviours. That tendency to frame a world of Eskimo "others" dominated both film Why White People Are Funny brings the documentary form to an unexpected place. Those who were holding the mirror up to Inuit culture finally have it turned back on themselves. The result is not always pretty, but it sure is amusing. From the Inuit point of view, visitors from the south are nothing less than "accidents waiting to happen."

The film is listed on my Consumerfest Wish List right at the top! I can't wait to see it.

How excellent, and what could be healthier than a good laugh on ourselves? I, too, would relish seeing this work.

What a brilliant concept! I hope Zebedee resists any tendancy towards too much anthropomorphism! :o)

Silbs - add it to your wish list for the holidays...

Douglas - you'd be interested to learn that Zebedee has some Scottish roots. He's been over to have a look for his contemporaries, I believe and was quite excited to meet them.

I would be very interested in a follow-up after viewing Michael. I am curious to learn if it lives up to the hype.