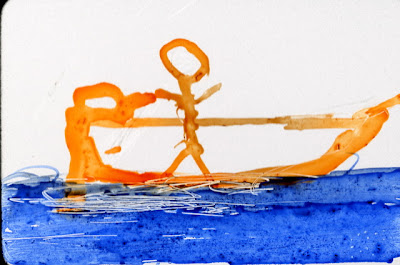 Outboard by Josephie Annahatak
In the 1970's Kangirsuk and most small arctic communities were cut off from the outside world in many ways. No roads led into them nor was there any outside contact other than radio telephone and only that when it worked! No TV, no radio, no video movie rentals, nothing. Everyone had to make up their own entertainment. During the fall and spring each year even airplane traffic came to a halt for six weeks or so as the water used for landing was either freezing of melting. This was the hardest time of the year as hunting and fishing also slowed down until travel became safer and easier again. It was a time to keep busy and get creative! 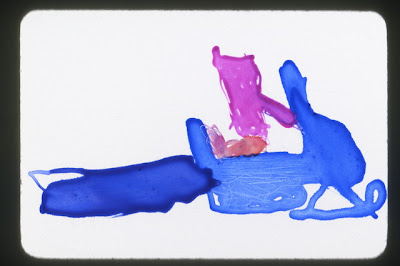 Ski-doo by unknown
In Montreal, I had learned to draw directly on blank 35mm slide stock with old-fashioned nib pens and acrylic inks, so once in Kangirsuk I introduced both students and adults to the technique in the evenings when there was little else to do. Many people attended these fun sessions and together we produced hundreds of coloured slides. Over the next few posts, I'll put up a few examples with the artist's name attached below when I know it. Often the name is missing, which is a pity as there is some good material here! 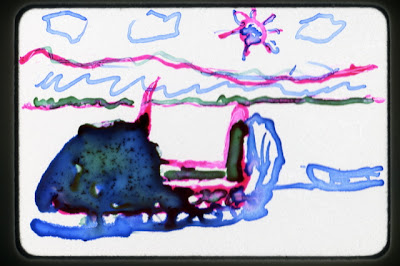 Ski-doo by Jessie Takolik
Today's slides show what was on everyone's mind: boats and ski-doos, the changing methods of transportation everyone used. We were all putting one away and getting ready to use the other.

Update!
Kristen had a good idea in her comment, so to follow-up, I've put up a selection of the ink art slides on a Flickr site. Enjoy!
Posted by Michael at 12:43 PM

How wonderful, Michael. I see that universal desire to express something with the drawn image. You must have been a hell of a good teacher.

I see a book here, Michael, or at least a Web site dedicated to these images. I bet there'd be a grant somewhere lurking to help the project along. Or am I too much in my own fundraising/spread the word work mode here... Thanks for sharing this - precious.

Thanks for doing that, Michael - they're awesome!