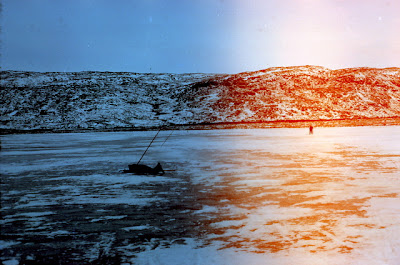 Traditionally many Inuit in Nunavik, the most northern part of Québec, depended on fish to get them through the winter. These families would head inland during the winter rather than go sealing along the coast. One of the reasons for this migration is the extremely high tidal range in Ungava Bay - one of the world's highest - made floe edge sealing a very dangerous occupation. The chances of the piece of ice you happened to be hunting on breaking off and floating out to sea was very high and your chances of returning to shore very low.

Fishing was actually done by 'spearing'. First one chopped a hole through the ice, seen here on a river where the ice wasn't too thick. Lake ice could easily grow up to several meters thick during the winter, so looking for a good stream with thinner ice was important! Once the hole was open and the ice chips were removed, one lay on the ice and dangled a little lure, often a bear's canine tooth or something else white and heavy, and bobbed it up and down to attract the fish. In one's other hand, a long three-pronged fishing spear was held with the point aimed towards the lure. When a fish came close to the lure, one made a quick jab and with some luck, the fish was quickly hauled out of the water and removed. In this somewhat damaged picture, two spears can be seen, with the nearest man already fishing.

In later years, gill nets were set via a series of holes, across a stream. Once set, they could be hauled out from either end and cleaned of fish. Then they were pulled back into the water from the hole at the far end and re-set for the next catch.

When I lived in Kangirsuk in the 1970's we ate fish every day, sometimes three meals a day! Yum!
Posted by Michael at 9:01 AM

Michael, your blog has become an integral part of my (reading )life.

Kristen - does that mean you've abandoned all hope of bettering yourself...? ;-)

You educate me, Michael

Like last winter, I am so enjoying this series on the Arctic.

I just love this slide. Was it the first on the roll? Did you pull out only the minimum of the lead strip? Did you only wind on once before starting to take photos? Sometimes I could get 38 out of a roll of 36. Sometimes all 38 would come back mounted, sometimes there would be a strip of two unmounted transparencies in the little plastic box, goodness, I even remember cardboard boxes! Then I carefully I considered whether to take each shot. Now with digital one does not need to think about such things!

Douglas - Sadly, I no longer remember and the print on the slide has faded away. I have two similar slides, but the other one is very dark and also unexposed in the same way. I agree digital has made life easier, especially in the very cold when film would sometimes crack and even break!