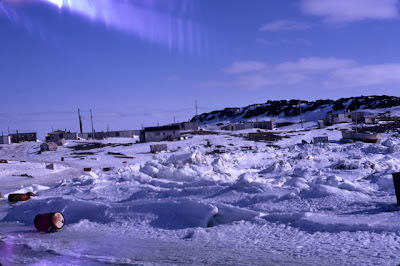 Just look at that ice jumble! The tides of Kangirsuk rise and fall many meters each day and that together with the huge rocks in the bay they conspire to create a total chaos of ice each year. The fact that the old Hudson's Bay Store and the village are on opposite sides of the bay, forced everyone to take the long way around when visiting or shopping. Trying to take the short-cut across the ice was full of perils as the ice was full or cracks and holes just waiting to gobble you up as you made your way through the mess. Everyone went the long way around the bay.

In the spring however, at high tide, the bay became a playground, albeit a dangerous one, for many people, especially teenagers. The challenge was to cross the bay by jumping quickly from one floating pan of ice to the next without slipping into the water. Here and there were 'safe' ice pans able to support one's weight, but most would sink under foot. The few safety panes gave a person a chance to plot the next few moves across pans of ice too small to support a person's weight beyond a second or two. Lightness of foot and speed were the tactics to use. Only a lucky few were able to get all the way across the bay without getting something wet, and, of course, wet meant cold as well. Really cold! 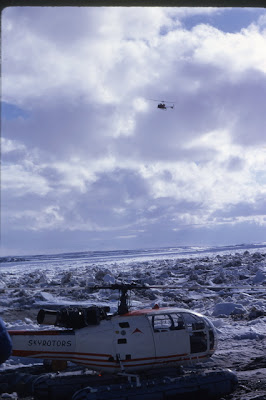 The helicopters? Well, they were another way to get across the bay without going around, but you really had to be on the pilots' good side...

In the top picture, the small house just to the left of center belonged to Tomaasi Kudluk who built a traditional kayak while I was there in 1972. It was perhaps the last of several he built for museums and various collectors and probably the last one built in Kangirsuk. I know that one now resides in the collection of the Canadian Museum of Civilization in Ottawa, but it seldom sees the light of day. Its lines are found in E.Y. Arima's book Inuit Kayaks in Canada (figure 37 on page 226). It would be a fun boat to build, having a 14'9" length and 24-1/4" beam.
Posted by Michael at 10:03 PM

In Newfoundland outports, that's called "copying the pans", and it could get you a reddened botttom if you got caught at it. Risky game, but those who've done it consider it a citizenship qualification for real baymen.
(I grew up in st. John's, and it wouldn't be pans you'd be copying in that harbour!)

I wonder if you know the relationship between Tomaasi and Tommy Kudluk the school's current Centre Director?

Also, I don't know if I ever mentioned this to you but, the is an effort underway to revive traditional kayak making up here. Adult education developed a course and launched it last year. When I was Inukjuaq last fall, the community turned out for the launching of the first two kayaks made in Nunavik in many years.