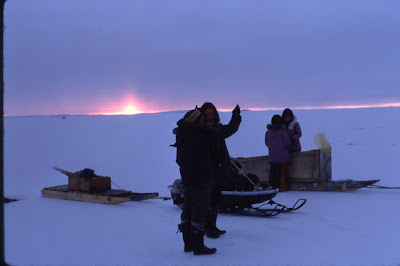 Every days that passes sees the sun rising a little bit earlier and setting a little bit later. By mid-March we'll arrive at the equinox, that day when light and dark become equal in length. From that point, the day grows longer and longer until the summer solstice, the longest daylight of the year.

If you live in the high latitudes, then the period of daylight accelerates even more quickly to the point when night disappears entirely long before the solstice. The sun can be seen above the horizon 24 hours a day or nearly so. The higher your latitude, the earlier this effect occurs after the equinox and the longer it lasts after the solstice.

In the photo above taken in the 1970's, a group of us are traveling by skidoo, taking advantage of the late night sunshine. The low sun is still bright enough to give a clear view of the terrain with all it's bumps and hollows, yet, the snow is hard and easy to travel on. We're en route to Quoartaq, a small village north of Kangirsuk to do some visiting and enjoy the dancing which the people there were well known for. I've removed the cowling on my skidoo because of the 'heat'. The girls are taking a break from riding in the box on the sled or kamotik. While the interior is padded, the ride can get rough at times! Someone is brewing tea, a constant excuse for stopping along the way.The two gentlemen are probably discussing their stock-market investments, a constant worry for high-rollers out on the trail far away from their brokers in Toronto and Tokyo...
Posted by Michael at 11:31 AM

Wonderful photo Michael. One of my favourite things about living in the Arctic is how the rapidly changing light makes the scenery change daily.

Great image. I've always wondered how the Inuit navigated out there on the "featureless" ice.