The Bearded Ones Come To Town 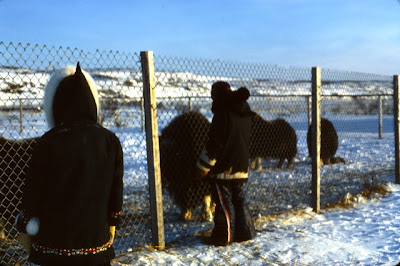 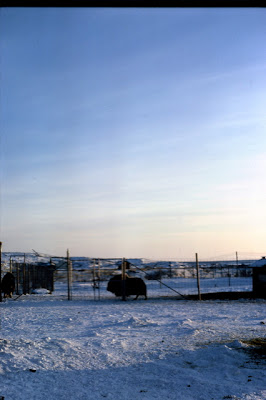 In the early 1800's the Hudson's Bay Company built a post they called Fort Chimo on the Kuujjuaq River which flows north into Ungava Bay. During the Second World War the Americans built an airstrip to refuel aircraft en route to and from Europe a few miles upstream and across the Kuujjuaq river from Fort Chimo.

Eventually the old HBC post closed, it's early history all but forgotten. The new town of 'Kuujjuaq' arose on the site of the old airbase and today has become a major hub of activity in Nunavik, the most northern part of Québec. 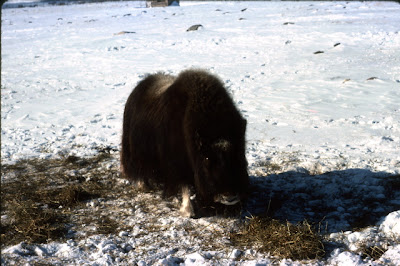 While living in Kangirsuk, I occasionally got a chance to visit Kuujjuaq. At that time, old Fort Chimo had been converted into an experimental field station to introduce musk oxen - known in Inuktitut as omingmuk or 'bearded ones' - into the northern Québec wilds. It was an interesting experiment and one which I believe met with some success. 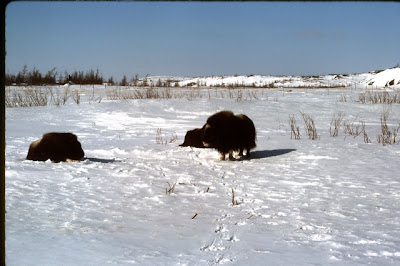 Now and then people living in Kangirsuk report seeing some of the released animals out on the tundra, many miles from where they were originally raised. Protected from hunting, perhaps some still roam the hills and valleys on Nunavik!
Posted by Michael at 11:29 AM

Some good history of the north there.

One of the muskox made it’s way south east, “musky” has taken control of a small island a little south of Nain, been there going on three years. He has become a bit of a local tourist attraction, wildlife people check on him regularly.

they are still here michael! they herd has grown and Tasiujaq has the largest concentration of musk-oxen in the area. However, to give an idea of how far they've spread, Quaqtaq also has a group of about 25 animals inhabiting Diana Island.