Barbro Lindman, paddling around southern New Zealand, could feel something was not right the other day and she got off the water. Not long afterwards, the bay she was attempting to paddle across got torn apart by high winds and tumbling surf. What was that 'feeling' she had? Well, it's probably something we all have, but seldom use because we live 'outside' the weather rather than 'in' it. Inuit who had grown up in camps, living most of their lives in the outdoors, had a keen sense of what the weather was about to do. Living indoors, we have become de-sensitized and tend not to pick up the subtile signals that are out there. Go paddling for a while, and suddenly you'll begin to 'hear' nature's signals again if you know what to 'listen to'. 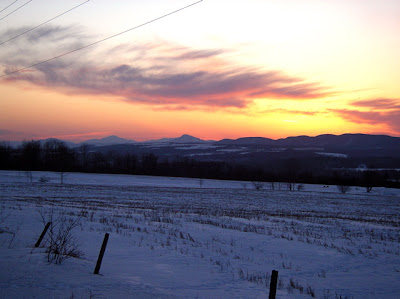 Driving home the other day, I stopped and took the sunset photo seen above. Then I turned slightly and took another, seen below. The picture above speaks of the old adage "Red sky at night, sailor's delight', the one below actually gives us more information. Can you read its message? 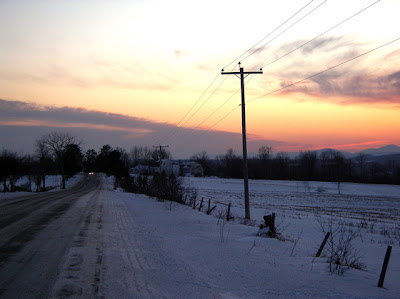 That's right. That line of clouds moving in is a warm front. By morning, the clouds will cover the sky, the wind will pick up and we'll have some precipitation. Sure enough the following day we saw a succession of snow, freezing rain and wind passing through our area.

Like Barbro, it pays to watch the weather and to catch the little signals that tell us of change.
Posted by Michael at 1:05 PM

Always good to hear your wisdom Michael. I was just reading the other day a kayaking book by David Seidman and he writes in one section about weather folklore and the most famous one which has proven its worth more than once was spoken by Christ in Matthew 16:2,3. "When it is evening, ye say it will be fair weather: for the sky is red. And in the morning, it will be foul weather today: for the sky is red and lowering." Red sky at night sailor's delight, red sky at morning sailor's take warning, works. I didn't know this was biblical.

Wonderful posting. Until one gets out on the water or wide open spaces they remain unaware of the vastness of the sky. Ask the folks in Wyoming.