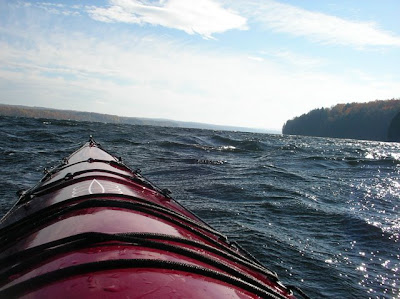 When I was old enough to travel on my own, I was determined to try to get to some of the wild, out-of-the-way places in the adventure books I'd read as a teenager. So while my friends headed off to Europe, I found myself in small Mexican highland villages, along rivers paddled by the French-Canadian Voyageurs and living in Inuit seal and walrus hunting camps. It never occurred to me that today some of these places would be called examples of poverty. True the people living in these places had relatively few possessions and at times found themselves hungry, but poor? I never thought so. These experiences taught me that poverty can often be a state of mind more than a state of being.

Today, like many of you, I live in a world full of magical electronic gadgets, with nearly instant world-wide communications and stores full of everything imaginable. Yet around me I see poverty worse than anything I saw as a young traveler. Today I see a poverty of spirit, of hope, of joy. The seal hunting camps may have been devoid of almost every convenience, yet all around one heard laughter, caring and warmth. The poverty I see today seems to have happened because we have become isolated and detached from each other. It has happened when we abused each other and forgot to be friends. It has happened because we have been thinking too much about ourselves and not enough about those around us. We have become selfish without realising it.

We can fill the world with material possessions and think we have solved the problems of poverty, but I believe we will do far more good, if we take care of those around us by helping, by being there, by expressing our joy for life, by raising our collective spirits when times get tough.

The photo above was taken yesterday when the lake was rough. The waves kept breaking into white-toothed splashing smiles as I paddled and surfed. There was nothing out there by my boat and I, but oh, what joy!
Posted by Michael at 8:52 AM

Nice to be reminded every now and then--but we should be living it daily. Thanks, Michael.