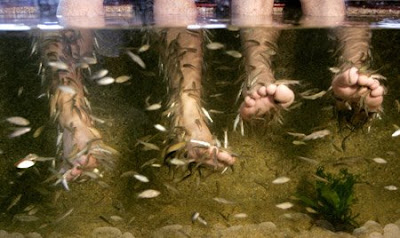 I've come across an item which could totally change the way we go kayaking! We all know the joys of paddling as well as the sorrows. One of the latter is the small matter of... aaa... let's call it, 'odor control', both personal and equipment related. Well, a very ecological solution may be at hand or perhaps I should say, at foot!

It seems the Asians have developed a small industry already using the technique. It's called "Fish Pedicure", but obviously, it has a wider application than mere pedicures. Carry a small bottle of these fish, a species of carp, along on your next trip and not only get your twinkies cleaned, but I suspect the guys would be happy to have a swim in your neoprene booties as well! It used to be 'Sink the Stink'. Now it's 'Eat the Stink'!

Now it's important to note that this procedure won't work as well in North America where sanitary regulations insist that the fish be sterilized between each treatment. Sadly, the poor little fish don't react well to being boiled, rendering repeated treatments less than successful. The good news is the rest of the world can enjoy healthy, clean feet not to mention paddling equipment during and after each outing!

Photo from Zimbio.com
Posted by Michael at 3:10 AM

Yeah - they called 'em "fish spa" here and is the weirdest thing ... I think it's a fad here that will pass.

yuck! I would rather stay with odour of kayak!

Looks kinda gross but if it helps it help !