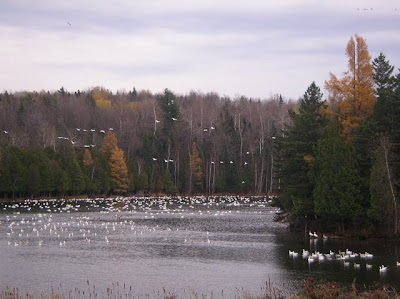 The first time I recall seeing snow geese was back in the 1970's when I lived in Kangirsuk in northern Quebec. I remember walking through the village with several Inuit friends when these large white geese with black wing tips flew overhead. My friends were surprised I didn't know what they were. While the geese didn't often land in northern Quebec, they were certainly well known to the Inuit as they flew overhead on their way to Baffin Island further north. 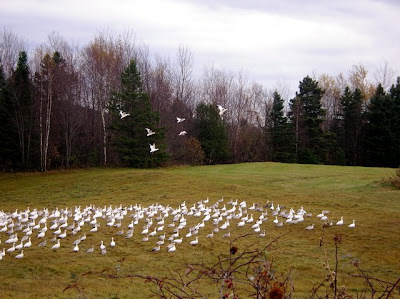 That has changed. Not that long ago when the number of snow Geese was down to about 5000 birds, they tended to migrate along the St Lawrence river and seldom came inland where I live. Today, I've heard there are about 800,000 or more birds and they've become well known visitors to local farmers' fields and ponds.

I rode my bike over to one of these farms the other day to see how they're getting along. Interestingly, I noticed at least two 'blue geese' among the flock (in the picture above, there are a couple of birds to the right of center with different, darker colouring). These are snow geese which have a slight genetic mutation which gives them different colouring from the more common type. Fun to see.
Posted by Michael at 9:37 AM

Nice shots Michael.I've been generating interest on our newsgroup about Maelstrom Kayaks. Be nice to try one.