There are those who claim an 'Adventure' occurs when the unexpected happens, and not the other way around. Others see the unexpected as an 'Accident'. Either way, it seems some people expect the unexpected. Some get lucky and walk away. Some don't. 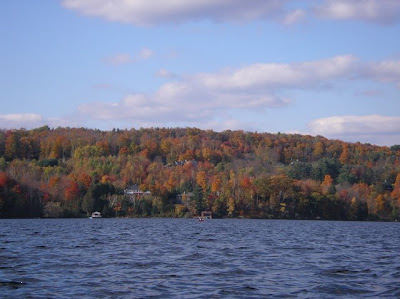 I went paddling today. It was sunny, calm, warmish - about 16°C - the water definitely chilling down now that it's fall. I noticed a lady launch her rec-kayak... I didn't say anything other than 'hello'. About an hour later, the wind had picked up considerably, the clouds had begun obscuring the sun and there was a chill in the air. I was crossing the lake heading home when I noticed the lady in the rec-kayak (see the tiny dot mid-photo). It occurred to me she had no spray-skirt, no immersion gear and no pfd visible when I'd seen her launch. I hope she did now because conditions were changing quickly and she had a mile or more of upwind paddling to do before she got home.

I always worry when I see people out there setting themselves up for an 'Adventure'. Personally, I'd rather enjoy my outings and keep the unexpected events to a minimum.
Posted by Michael at 5:39 PM