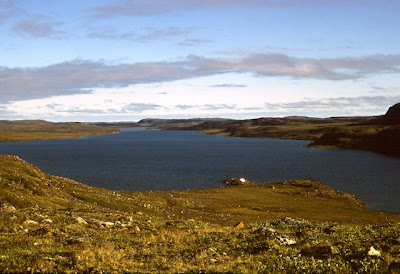 Once the lake was ice free - that would take us into July - we began to fish from the Zodiac boat we'd brought along. We could set our gill nets anywhere on the lake and at any depth we desired. Once the nets were set, our daily duties included pulling each one and cleaning out its catch. 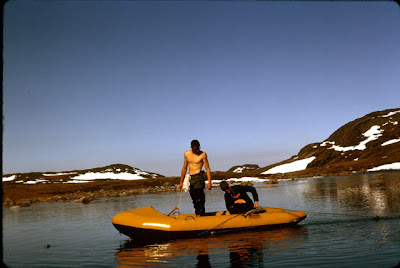 The remainder of the day was spent 'working up' the fish. That is, we weighed them, checked their stomachs, looked for parasites and took various other samples, including an ootilith ear bone used to determine the age of the fish. We soon discovered the lake contained at least four fish species: lake trout, arctic char, whitefish and stickleback minnows in the lake. 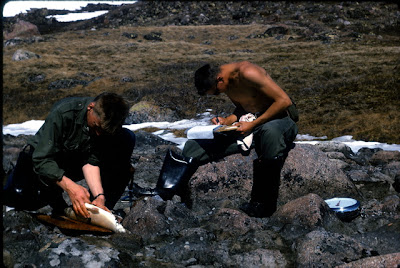 We feasted on the char most of the summer, it being the best tasting. The sticklebacks we caught and kept as pets. Each evening we would take out the Zodiac along with a plankton net and got for a troll. Some of the catch was stored for later analysis, but some was used to feed our pets. Eventually we trained our sticklebacks to jump right out of their containers and take the plankton from our fingertips. The thought occurred to me that I might become a stickleback circus impresario and give up my wild ideas of being an arctic adventurer. Alas, I became neither!
Posted by Michael at 9:05 AM