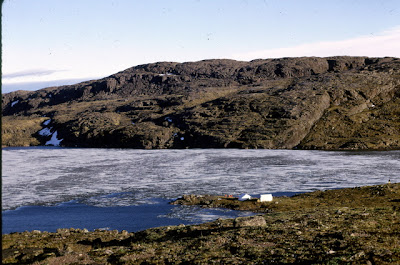 Once all our equipment arrived by aircraft, we set about making a campsite. We had two large tents, one for sleeping and the other for eating and working. Our goal was to study the fish productivity of the lake and to do this we needed to catch fish. While the ice covered the lake, we cut holes and strung gill nets from hole to hole which we checked every day.

As the ice thinned, we were able to use SCUBA gear to set and tend the nets under the ice. This was lots of fun, as you can imagine. We'd work in pairs, swimming along the net with one person releasing the fish from the net then his partner would recatch the fish in a sack. Usually. The odd one did manage to get away! Once on the surface, we either kept the fish for aging and stomach sampling or we weighed, measured and tagged them for release. The hope was to catch them again later in the summer or during a subsequent year and measure any changes. 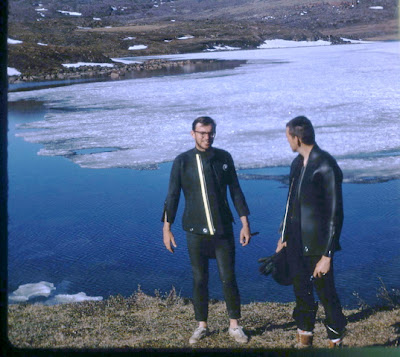 Once there was open water at the shoreline, we'd set nets out from the shore and under the ice. This allowed us to increase the number of nets, but it was tricky work as the nets were very hard to see underwater. On one occasion, my partner - the guy on the right, above - lost sight of the net while diving and he began swimming about, starting to panic as it was the sole means we had to get to shore and out. I immediately saw his predicament and, having now lost the net as well, I headed for the bottom to get away from him. I didn't know what he'd do in his panicky state if he caught me and didn't wait around to find out. I figured he would follow me thinking I knew where we were. Once at the bottom of the lake, I followed the slope upwards and eventually we came to the shore which, thankfully, was ice free! We never said much about the incident, but, for me, it was one of those 'life flashing by' episodes people tell you about when they think their time has come.
Posted by Michael at 7:47 PM

Did you have a compressor to fill your tanks, Michael?

Yes, we were well equiped to do many things including being able to refill our air tanks.