Just after breakfast I heard the wind starting to pick up outside the house. I grabbed my camera and headed for the lake. The ice was on it's way out, I was sure of it! 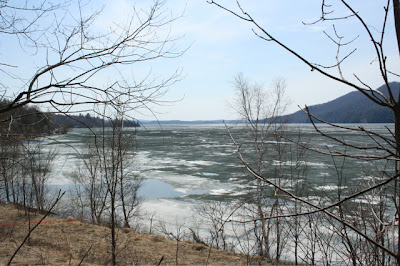 I first stopped at the lake's upper end to see what was going on. I was hoping the ice was solid enough to start rafting up and building ridges, but it was too far gone for that. At this stage, ice has some cohesive strength horizontally, but as soon as it lifts, it collapses into cylindrical crystals, which easily break apart. This ice is commonly called 'candle ice' due to its shape. It wasn't going to put on a spectacular show this year. Too bad. 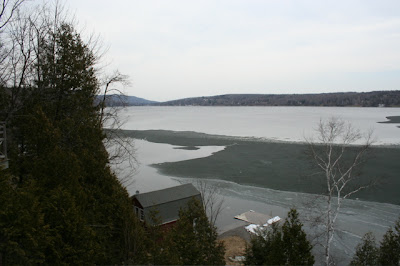 Lower down the lake, I could see the wind had moved much of the ice over to the eastern shore although several large dark grey rafts remained attacked to the western shore. The middle was mostly open with just a few large pans of ice floating about. The waves were beginning to break these rafts up along their windward edges and piles of broken candle ice grew bigger where they butted into one another. The ice seemed weak enough to paddle right into it. You'd be able to force it apart quite easily, I'm sure. 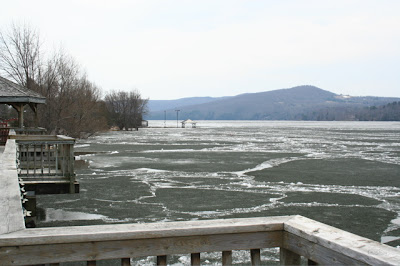 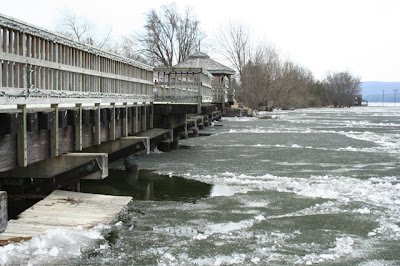 Pilings holding the ice pans until they break up.
At the outlet, ice rafts were slowly being split apart to get through the pilings under the old railway bridge now converted to a public pier. More ice was jamming up-stream, splintering and shattering apart thanks again to the steady winds. There were ice candles piled up everywhere as the waves continued to churn the ice rafts into bits. By evening, it should all be gone under the bridge and away! I'll be paddling tomorrow, methinks!
Posted by Michael at 8:20 AM

For God's sake don't fall in! That looks seriously cold.

It also makes me remember when we used to get decent winter's in Scotland. Never like that, of course, but snow at least.

Simon - actually the air temp was 26°C at the time and the water probably warmer than people paddle in during the winter. But, you're right. No fun falling into that stuff and then wondering how to get out of it!

still, you must be hardy to go out in that, but you do seem to like it chilly!