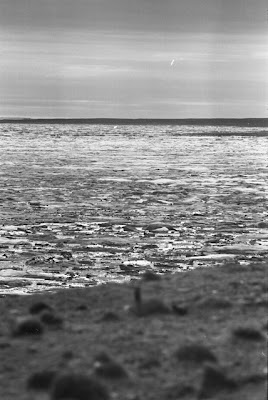 Days like this, waiting for old man Winter to make up his mind and leave and with Spring being a coy, shy young thing hiding in the wings, remind me of being stranded on the beach in arctic Canada. The photo, taken in the hunting camp at Iglujjuaq on north-western Baffin Island, shows the kilometer or so span of sea ice attached to the shore over which we would cross to our freighter canoe whenever we headed out hunting. It was stored at the sena, or ice-edge. However as the season progressed, pieces of the ice began to slowly break away and it was foolish to leave the canoe too close to the edge. Each night we'd bring it closer to the beach, until, the ice being totally rotten like in the picture, we'd had to park it on the beach itself.

Now we could no longer hunt by canoe. We'd take long walks along the shore on the off chance a seal lay on the ice near the shore where it could be retrieved. We lived through this frustrating period for a couple of weeks (in July) until finally the tides and the winds cleared the ice and freed our boats for hunting once again.

It was a happy time in camp. Everyone had become tired of eating cached food, some of it stored underground several years previously. Now we could hunt and enjoy fresh meat once again, not to mention the char we caught as they swam along the shore into the nets we set in the evening. Those were happy days, indeed!
Posted by Michael at 5:41 PM

agree!
I realise it must be so cold that the 'deep freeze' keeps food, but the idea of it being stored so for several years? needs must.

I live in davenport Iowa and I want to unlock an iphone 3G 8GB and I want to know how much it costs? And if the AT&T in Davenport even does the unlock.