The summer spent on the lake was full of things I'd never seen or done before. It was my first trip north of the Arctic Circle, the first time seeing fish jumping up falls, first musk-ox sighting, first caribou chase and so on. Below are some pictures of some of these firsts: 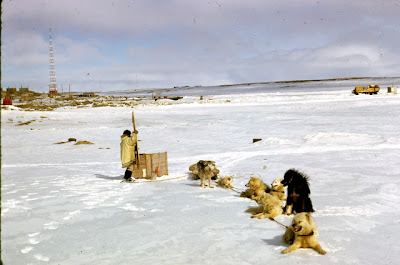 Inuk tending to his kimupsi (dog team) in Cambridge Bay. 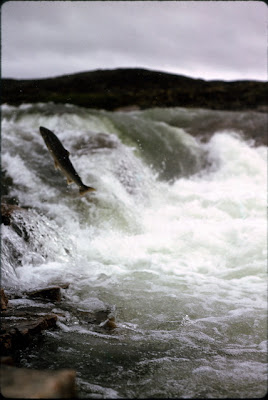 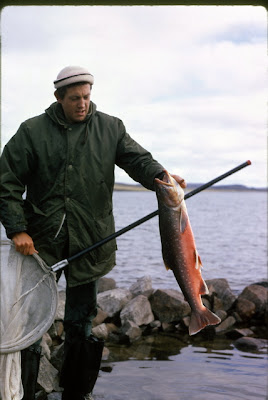 (Left) Char jumping falls in the river below the lake and (right) my boss holding up an arctic char prior to having dinner. 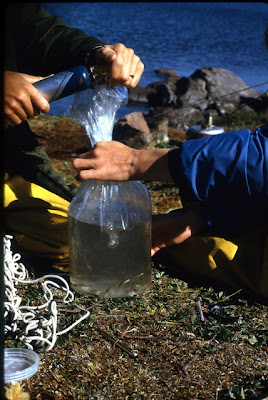 This final picture has a longer story. One of the objectives was to transport some fish back to the lab outside of Montreal. For this we trapped the fish and kept them alive in plastic bags (see picture above). The bags were placed in wooden crates and surrounded with ice, also in bags. As the voyage south proceeded, at each stop, we would open the bags and bubble more oxygen into the water so the fish had something to breathe. In Edmonton, we fell asleep during the all night layover in the terminal and were rudely awakened at dawn by the scream of an outraged mother whose young child had rushed over to run, splash and finally fall in a puddle of melt water which spread out after leaking out of one of our fish boxes while we slept!

Most of the fish made it to Montreal safely and lived quite happily for some time afterwards at the lab. I worked there during the winter counting rings on the oolilith bones to determine ages of the fish we'd caught, but that's another story.
Posted by Michael at 9:03 AM

those dogs look very wooly and almost quite wild.
you're doing a fab job of scanning your pictures, I never get a good result when I try and am unsure if its the equipment or me.

Claire - it must be my equipment because I certainly don't have any skills in the scanning dept!