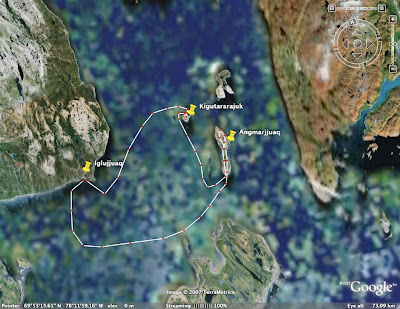 On July 16th, 1969, three of us headed off hunting as soon as the ice left Iglujjuaq. I kept notes every time we went out, so here are some excerpts from them. We headed eastwards into the newly opened water and soon found the new ice edge behind the tiny islet of Kigutararayuk. This place is well known for its large numbers of inuksuit, pillars and man-like structures, all built from the flat shale scattered around. The largest one was built in August 1946 by the father of the hunter I was with. He still remembered it being built when he was 15. Some others were very old indeed with lichen spreading across from stone to stone.

The fog would come and go during the day making it difficult to see any seals in the water so we decided to stop on another small island called Angmarjjuaq for the night. As soon as we landed on the south end we noticed some caribou tracks and we immediately set off to hunt it. The thought of eating something different after months of seal and fish drove us on!

Before long we began to notice imprints of a lone wolf that was also following the caribou. Every so often their tracks became mixed together and we wondered which of us would find the caribou first. Clearly, we were suddenly in a race for food! We decided to split apart and each walk along a separate shore of the long narrow island. This made me nervous as I'd never shot a caribou before and didn't know if I could. I had no idea what I'd do if faced with a hungry wolf!

Coming over a slight ridge almost at the northern end of the island, I spotted the caribou by itself. I knew I couldn't shoot, but I could also see my companion off to the left. I signaled to him the caribou was in sight. Meanwhile I worked around the animal to keep it from escaping onto the ice attached to the island's tip. We soon had a carcass to carry back to the boat. We never did see the wolf, only its tracks.

The caribou was butchered and made up into two packsack-like bundles into which we then put the legs and so on. Slinging the packs over our backs, we then began the long walk back to the boat, several kilometers away. It took us 4 hours to reach the boat. Included along the way were numerous rest halts, including one where I just walked into a shallow pond and fell flat on my face, relieved to cool down! My notes speak of sore feet from walking all day in hip-waders...

The hunt lasted two more days largely because of the heavy amounts of floating ice. We were constantly having to jump out of the canoe and pull it up on ice pans to prevent it from being crushed as the ice floes spun around in the currents. Often we'd then have to wait for the tide to turn and release the packed ice and provide us with leads back into the open water. When we finally got back to camp, no one could have been more proud than we were to have something new and tasty to share with those waiting for our arrival.
Posted by Michael at 9:33 AM

I truly appreciate you sharing these stories, Michael. Thank you.

Reads much like the book "The Eskimos" (I forget the author...and don't like the E word particularly). You have truly lived some adventures...and you relate them well.

Silbs - Peter Freuchen was the author. He lived in north-eastern Greenland most of his life and certainly lived as an Inuk hunter and trader. He and Knud Rasmussen were great pals and did a lot of traveling together, including a visit to Igloolik in the 1920's during their 'Fifth Thule' expedition.