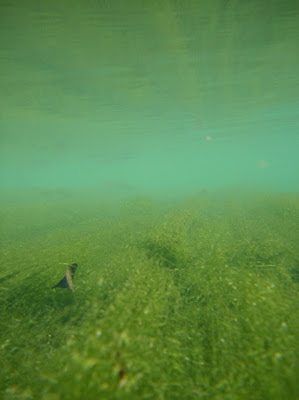 The world-view of a fish in a murky Florida steam bed.
On April 13th, 2007 a letter published in the Nunatsiaq News suggested a murky future for the Inuktitut language and this in spite of recent government moves in Nunavut to promote more use of the language. There has definitely been a change in the language of the Inuit over the years. Even back in the 1970's, older people complained that young people no longer spoke the language "properly", especially the dropping of many of the old expressions and the rich variety of infixes and suffixes which characterize the language. The language was naturally responding to changing times and the rapid influx of new ideas and materials as well as the opening of the rest of the world into Inuit homes. English and French words were increasingly being used within Inuktitut to express ideas. It was both 'cool' and easier to borrow words.
Here's Louis-Jacques' letter:

Without having been schooled in the Inuit language until the end of high school, nobody possesses enough Inuktitut vocabulary and speaking habits to express him- or herself with ease in all fields of conversation in this language
Such vocabulary does exist in specialized lexicons, but it is not taught in school. For the time being, then, mastering a level of Inuktitut sophisticated enough for expressing oneself easily when speaking about administration, technical topics, or even everyday life in a modern community constitutes a professional skill which only interpreters and translators possess (and which most of them do not use outside their work.)

The situation varies from place to place, but given Inuktitut is a window into the world-view of the Inuit, I hope Louis-Jacques is wrong. If I had my way, every child in Canada would be given at least introductory lessons in one of the 'First Languages' of Canada. What an insight we would all have into the place we call home if we could 'see' it from the collective experience people who have been here for thousands of years! Clearing away some of our 'mucky' ideas wouldn't hurt a bit!
Posted by Michael at 5:56 PM

Saddly so. We here about the positives of melting pots and often lose sight of what is lost in the process. I fear that, along with the language, the stories and oral traditions will be lost.

I like that in Iceland words from other languages aren't allowed to infiltrate 'Icelandic' - such as Internet, or blog or c'est la vie. There's a special govt committee that does nothing else but act as watchdog and takes those words and creates new Icelandic words for them. I suppose one of the morals of the story is that to preserve original languages, it does help to be top-sanctioned.

I think I might be acquainted with the your L-J, Michael. His insight on life up here is as long as your own. Given my persepctive, on the ground today, so to speak, I think that L-J's forecast is accurate. More than that, the situation has probably worsened as the language becomes more and more convoluted by English in particular.

What a pity if L-J is right! Language is, among other things, the way a culture understands the world. Inuktitut deserves a better future.

Why don't you start a web site teaching people how to speak Inuit? It will be fun and may have a boomerang effect. They say more languages you speak the longer you live.