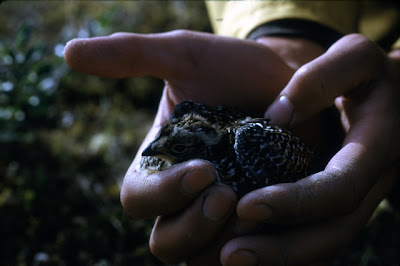 The lake's watershed, just west of Bathurst Inlet in the central Canadian arctic, was a place full of land animals. As the summer passed, we had the chance to become familiar with many of them. Soon after our arrival, birds began arriving to have their young. As they all nested on the ground - there being no trees - nests were frequently encountered and we got to know the babies and watch them grow up and finally fly away. 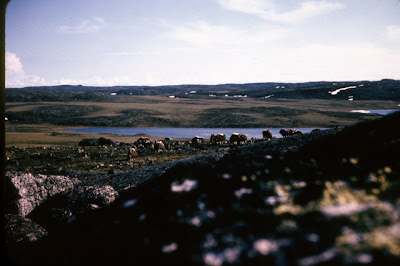 A herd of musk oxen frequented the river valley below the lake and they too became our companions. In this picture, they had made one of their few treks past our camp and up to the top end of the lake. I came home with a bag full of their winter under-fur picked up off the ground, which I later had knit into a soft, warm scarf for my Mother. She still has it! 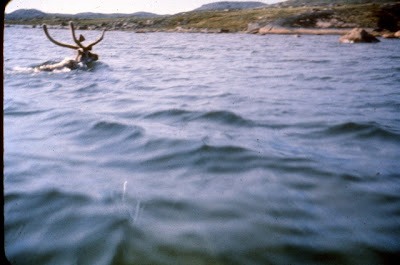 Caribou began arriving in early August looking for relief from the bugs which plague them constantly. This one tried crossing the lake one day as we were checking nets in water too shallow and rocky to risk the outboard. We tried catching it for dinner, but alas, it was an excellent swimmer and got away, although it did stop and turn on the beach, giving us, I swear, the caribou equivalent of 'the finger'. Macaroni steaks were served once again...

We often saw ducks and geese as well and they did provide us with a meal now and then, although we certainly never came close to 'living off the land' as the expression goes.
Posted by Michael at 3:09 PM

I saw a picture you posted a couple days back in which you and your field partner were lightly dressed; yet your inland. Weren't the mosquitos unbearable?

Do research labs/universities still run such programs, Michael? What a terrific experience for a couple of young lads! Am also thoroughly enjoying your photos? Are these old slides or film?

C'est moi - we were tough back in those days before bugs were invented! LOL Actually, there were some days when the bugs were less present. It wasn't a particularly bad bug area either. I've been in much worse places!

Kristen - These are digital versions of my original slides. I think young people at university still have similar opportunities like I did. Certainly research projects are still taking place and need people. Global warming research is big at the moment as the arctic is noticeably affected.

What software program do you use to transfer?

Kristen - I scan the slides and B&W film using my Epson CX 7800 3-in-1 printer which comes with a special film holder for the purpose. The Epson scan software does the rest for me, including removing scratches and dust etc. All very slick for the digitally challenged person like myself!