That Thick Enough For Ya? 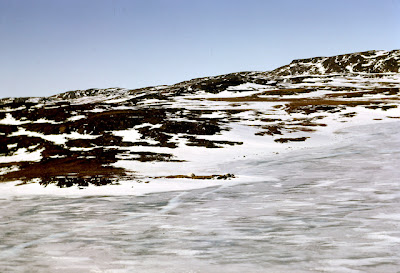 While at university, I actively sought out summer jobs which would get me a free ride north to Canada's arctic territories. In 1967, I worked as a fish scientist's assistant on this small lake in the central arctic. If you look closely, you can just make out our tiny tent on the spit of land that jutted out into the frozen lake.

It was early June when the picture was taken. We had flown in by light aircraft the previous day. The pilot was concerned the ice might not be thick enough for us to land and he made several passes a few meters over the ice to check it carefully. Still worried, he tried a few 'touch and goes', bouncing the skis on the snow. He then circled around and checked the ski tracks for signs of water. Finally satisfied it was safe to land we touched down and taxied to the point to offload.

One of our pieces of equipment was a powered ice auger. For fun, we drilled a hole down through the ice to check how deep it was. Nine feet thick! The pilot gave a huge grin. "Guess that's good enough to bring in the second load..." he quipped, then revved up the motor and took off. We began to wonder how we'd ever catch fish through that amount of ice...

I'll post a little series of stories from this lake over the next few days.
Posted by Michael at 8:27 AM

What a tale! You have me eagerly anticipating more!

I wouldn't have noticed the tent if you hadn't said to look for it! it looks like a samll thing to provide protection from the the arctic!

I am anticipating the next installments too.