Most of us use our decklines to temporarily store our paddles and other gear while we're out paddling. The fact that the lines tend to lay flat on the deck can often make it a pain to quickly slip the blade under the line, especially out at the bow. Many people end up using plastic beads or - if you're really traditionally minded - carved bone or antler rings to keep the lines slightly off the deck. I've used another method: using the line itself by tying some inline knots along its length. 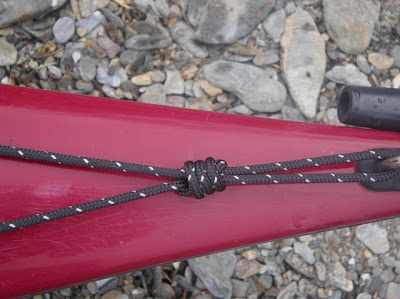 At the leading edge of the line, I tied in a knot just as the lines came off the forward anchor point. 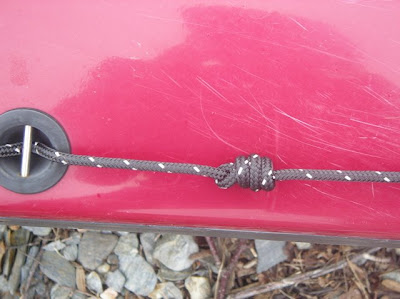 About 30 cms along the line, I put another knot just ahead of the next anchor point running aft. Voila! The line is off the deck and ready for whatever I want to slip under it, including my mitted glove should I find myself in the water in my winter immersion gear. Things like that have happened!

The knot I use is simple to tie. Make a small loop in the line at the point you want the knot. A few centimeters from the curve of the loop, give the cord a few turns around the loop and then thread the bitter end through the loop. Pull tight and you've got yourself knotty bit! Repeat as needed.
Posted by Michael at 10:48 AM

Thanx for a great tip.

After practising my rescues in icy water wearing gloves, I realised I need something on my deck lines to allow me to grab my deck lines more easily. I was originally thinking wood or plastic beads, but knots would rattle less and not abrade the kayak's gel coat.

See photos and video, plus comments on what I learned at: http://pawistik.blogspot.ca/2012/04/out-practising-what-i-preach.html

Searching the 'net for "kayak deck line knot", I found this post.