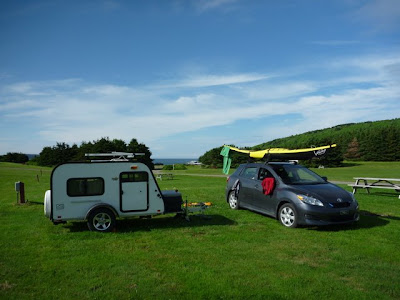 There's a terrific road that winds its way along Cape Breton's Gulf shore. Called the 'Cabot Trail', it twists and turns its way around the hills and, now and then, gives one breath-taking vistas of the Gulf of St Lawrence. Just south of the National Park, I stopped to go for an afternoon paddle in order to have a look at the interesting shoreline. 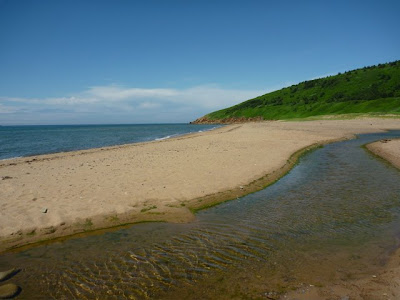 I managed to launch from one of the very few sandy beaches and headed up the coast for a few hours. The sun had finally returned after weeks of cloudy weather and it gave me a chance to enjoy the incredible variety of rock formations in the cliff faces along my route. 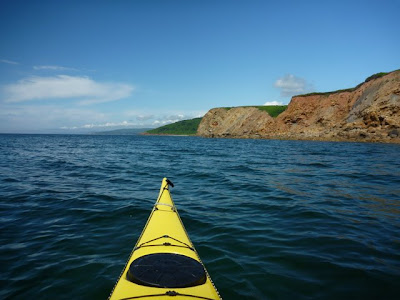 Nova Scotia was actually part of north-western Africa before the Atlantic Ocean developed and so shares much of the same geology. I found this fascinating. I could almost imagine I was paddling along the coast of Morocco! 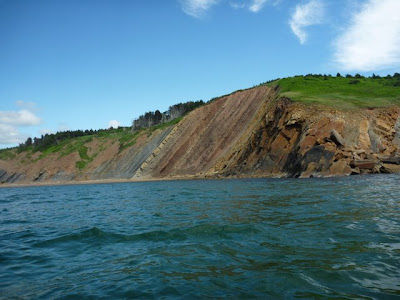 Along this section of the coast, the waters are relatively shallow and warm. As one heads further north, the hills grow in size, drop directly into the sea, the sandy beaches disappear and are replaced in a few spots by steep cobble beaches and the waters get deeper and colder. Whales are often seen feeding close to shore.
Posted by Michael at 8:01 PM

I love the colours, the fresh green and crisp blue in perfect combination.