Just inside the Minas Basin, an offshoot of the Bay of Fundy is Five Islands Provincial Park. The weekend I was there, a 5km and 10km run was held across the tidal mud flats to the islands offshore. The run called Not Since Moses has been growing in popularity since it began a few years ago and attracts hundreds of people. It's now a two day event. If you're a runner, this one is definitely a challenge with a difference! If you click on the picture above you can make out the runners on their way out to the islands. 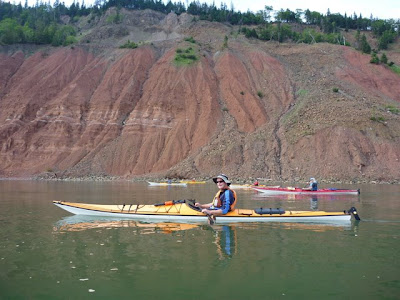 I chose to go for a geology walk along the shoreline, but later in the day when the tide returned a bunch of us went for a paddle over the same ground many of them had run on hours before. The red, black and white colours of the rocks in this area of Nova Scotia make for a fascinating paddle. Luckily for us, the weather was calm and we could take out time exploring the various caves along the way. In rainy weather there are waterfalls one can paddle under. 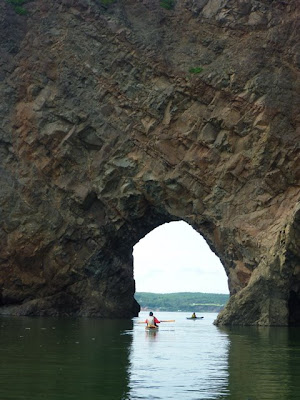 We made do paddling through a large arch that the 10km runners had gone through when the tide was lower earlier in the day. 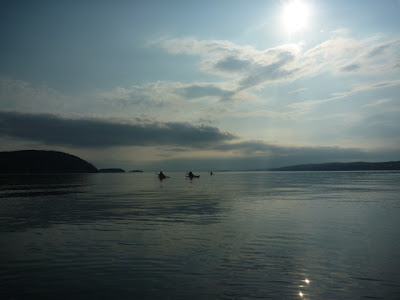 The high tides in the Minas Basin force paddlers to keep a sharp eye on the clock. Generally one has about an hour either side of slack water. After that the tidal currents begin running at speeds well beyond the capacities of a kayaker. As we headed back to the Park, we could see the swirls and boils beginning to form on the surface. We didn't linger any longer...
Posted by Michael at 1:19 PM

Nice pix, Michael - ain't that Bay of Fundy something else??? I get the wobbley willies just watching from shore as that water surges back in. Hope you enjoy StanFest - Gerry and Jose can tell ya a few tales about those Fundy Tides...